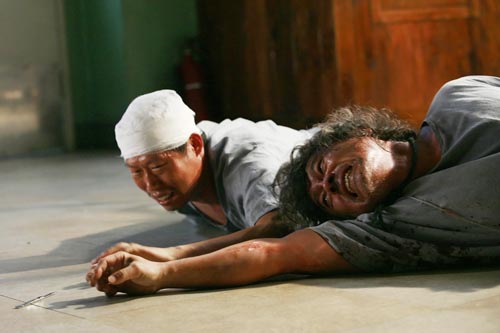 In “Desire to Kill,” Min-ho (Chun Ho-jin), right, decides to kill Sang-eop (Yoo Hae-jin) after the two are hospitalized at the same clinic. Min-ho believes Sang-eop was involved in his wife’s death. Provided by Lotte Entertainment


Memories can be unreliable, not to mention easily manipulated. When it comes to a pair of neurotic patients who share a mysterious past, memories can be further skewed, until nothing is as it appears to be.

“Desire to Kill,” directed by Jo Won-hee and Kim Sang-hwa, is an intricate thriller about guilt, revenge and memory loss that builds to a surprising yet logical conclusion. There is also plenty of humor along the way to lighten the mood when things get too tense.

Forlorn and bedridden from a stroke, the shrunken middle-aged man Min-ho (Chun Ho-jin) repeatedly attempts to commit suicide in a small hospital room. One day, a new patient, Sang-eop (Yoo Hae-jin), arrives, and Min-ho remembers instantly what has happened between them. There is a snapshot of his distant memory: a young woman happily cuddling a little girl, until her smile disappears when Sang-eop appears with a knife in hand.

Unable to move his body except his hands, Min-ho sets out to avenge his wife’s death.

Sang-eop has a case of amnesia that makes it difficult for him to remember recent events. He is pushed out of bed as Min-ho secretly attacks him with whatever he can grab hold of, but the next morning, Sang-eop remembers nothing.

With the help of a new and radical medicine prescribed by an unknown doctor, however, Sang-eop gradually recovers his memory and discovers the man lying in the bed next to him is out for revenge. What ensues is a series of fights. Cups are thrown and ropes are flung as the two physically disabled men make frantic efforts to kill each other. Fine acting amplifies the humor. Director Jo guaranteed in a press preview on Monday that viewers will “see the best acting by the best actors in our country.”

No one else in the hospital notices their bloody fights, with the medical staff and patients engrossed in a baseball game on TV.

Despite the humorous overtones, the film deals with serious questions. Who was the real perpetrator? And how did they end up in the same hospital room?

Overall, this thriller by the first-time directors stands out for its intricate plot, strong acting performances and the film’s eye-opening take on human nature.