Life along Korea’s other dividing line

Life along Korea’s other dividing line 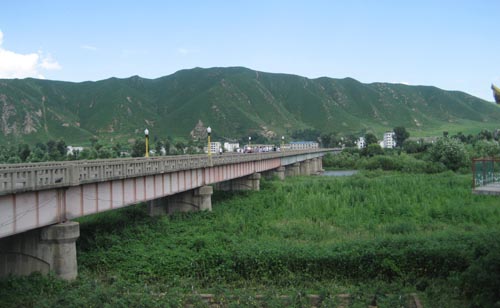 Tumen Bridge connects the Chinese city of Tumen and the North Korean city of Namyang. Customs offices are located on both sides. By Park Soo-mee


YANJI, China - As far as North Korea is concerned, all it takes is one word to set the political tone of a discussion. One’s choice of adjective can lead to emphatic agreement or cause violent offense.

But when I went traveling along the border between China and North Korea, 60 years after war broke out on the peninsula, the word that came to mind was “beautiful.”

The evening glow on the cornfields along the roads leading from the village of Fangchuan to Yanji and the Tumen River, which marks part of the border, was poetic. The images will haunt me whenever I hear of another North Korean shot by a guard while trying to escape this place.

Last month, I went on an unusual six-day road trip along the border between North Korea and China with a group of students from the University of North Korean Studies in Seoul. Accompanying the group were two professors and two local guides, one of them a Japanese-Korean and the other a joseonjok, an ethnic Korean in China who spoke fluent Korean and knew the border fairly well. 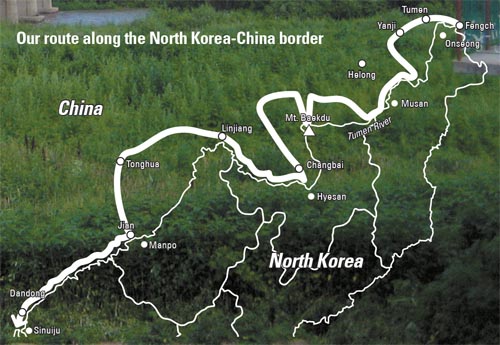 On a chartered bus with a Chinese driver, the group of about 30, mostly Korean nationals, traveled an average of five to seven hours a day. We departed Fangchuan, located where Russia, North Korea and China meet, and drove all the way down to Dandong, a booming industrial city in Liaoning Province where shuttle buses arrive from across the border twice a day to drop off merchants from the North Korean city of Sinuiju. Between Fangchuan and Dandong, we stopped at tourist sites to catch a glimpse of popular attractions that are familiar to South Koreans like Mount Baekdu (the Chinese call it Mount Changbai) and the pyramid tombs of Goguryeo in Jian. The distance we covered totaled roughly 1,600 kilometers (994 miles).

I never expected the river to be so beautiful. The Tumen I had studied from my newspaper clippings was a bloody place, where defectors stepped over dead bodies on frozen water, fleeing border guards.

Proud even on the margins

The Tumen’s allure was just another aspect of its place in the tragic history of Korean division. Ever since the North and South signed an armistice in 1953, most South Koreans have only seen the river in photographs. A lucky few, like me, have seen it from Chinese soil. Yet no river speaks so poignantly of our country’s wounded past as this one. Along the water still live the descendants of Korean intellectuals, missionaries and freedom fighters who moved there during the Japanese colonial period to escape the police and lead a resistance movement.

Much of that history is forgotten. South Koreans today know little about their Korean-Chinese cousins.

“If you see the word ‘Korean-American’ in a South Korean newspaper he will likely be a wealthy businessman,” a Korean-Chinese guide tells me on our way to Yanji. “If it’s an ethnic Korean from China, she’ll probably be some illegal worker serving food in a dingy restaurant in Seoul.”

On the afternoon we arrived, we headed straight to the Tumen, to a site that houses a detention center for North Korean defectors captured while trying to escape their homeland. On the other side of the river is the North Korean city of Namyang, where a startling portrait of Kim Il Sung hanging on the gate of a train station is visible through a telescope from the Chinese side.

We stopped at the old house of Ahn Jung-geun, an independence fighter considered a national hero in Korea. His fame rests on his assassination of Ito Hirobumi, the Japanese statesman who pushed through the treaty that formalized Japan’s annexation of Korea. 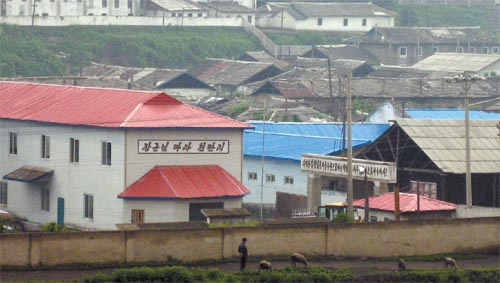 The North Korean village of Hyesan seen from the Chinese town of Changbai near Mount Baekdu. By Park Soo-mee


Ahn shot Ito in the chest on a railway platform in Harbin with a gun he hid in a lunchbox. He was eventually turned over to the Japanese authorities and sentenced to death in 1910, the same year Japan annexed Korea. His Chinese home, where he planned the assassination, was a humble Korean-style house with a modest garden. A photograph of Ahn and a small altar was displayed inside the room, and many of the Korean tourists bowed.

We spent our first night at a fancy hotel in Yanji, a fascinating place for those interested in modern Korean history. One might expect something like Koreatown in Los Angeles, where flashing signs in Korean abound, advertising karaoke and barbecue joints. But here the heritage goes deeper. The locals have an acute sense of ethnic pride, with second and even third generation Korean-Chinese speaking their ancestral tongue fluently.

One female docent we met at Daisung Middle School in Longjing took particular pride in her community. During the Japanese occupation, the school was a sanctuary for Korea’s independence movement, and some figures who made up the nation’s conscience once studied here, including the famed Korean poet Yoon Dong-ju.

“It was one of the only schools during the colonial period that openly taught its students the history and geography of Korea,” she says. In retaliation, Japanese authorities arrested its Korean teachers, prompting the students to stage protests at the local Japanese consulate. This uncompromising attitude is passed down to this day.

“Many Korean parents here say they would disown their sons if they brought a Chinese girlfriend home,” says our cheerful guide, who was born and raised in Yanbian. “Most of my friends are Koreans. We eat Korean food, and we talk in Korean.”

When the Chinese government designated Yanbian as a “Korean Autonomous Prefecture” in 1952, about 60 percent of the population in the region was Korean. Many were migrants who moved to China during the Japanese annexation. They stayed behind even after the country was liberated from Japan as the Chinese civil war heated up.

To a casual observer, Yanji looks like a smaller, darker version of Seoul with factories and apartment complexes scattered about chaotically. But on second glance, the people here dress and speak more like North Koreans. Many have cousins in the North whom they have visited at least once. Today, Yanji is home to thousands of North Korean refugees waiting to meet with the brokers, missionaries or human rights activists who have promised to take them to the South. 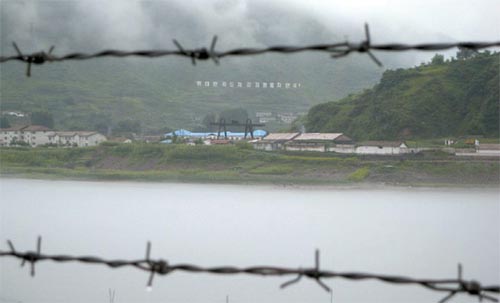 Supung Dam, an ambitious hydroelectric project near the Yalu River in North Korea, as seen from northeastern China. A banner in the mountain reads “Hail the heroic leader Kim Jong-il.” By Kim Deok-jin

The banality of survival

On the second day, we moved to Sanhe, a township directly opposite the North Korean city of Hoeryong. Known as the birthplace of Kim Jong-il’s mother, Hoeryong produces a good portion of the country’s crops, including corn and rice. From a hill overlooking the North Korean village, we could see smoke coming out of the chimneys of factories - mostly garment and ceramics manufacturers, we were told. Recently, these chimneys had been still, when production was halted because they couldn’t afford to buy materials.

The roads leading from Sanhe to Nanping, which borders the North Korean town of Musan, were lined with mountains so graceful that it was easy to forget we were passing a military compound.

When we arrived at Chongshan village, originally a joseonjok enclave in Helong, we took a long stroll along the riverfront, which leads to the North Korean province of Ryanggang over a small bridge. A two-story customs building was under construction in the North. Our local guide said it had been unfinished for four years.

The stream at Chongshan was so narrow that you could hear the splashing of a North Korean woman washing her clothes under the bridge. As we wondered past, an officer on duty holding the leash of a large dog carefully studied our faces from across the river through a telescope. When a young woman in our group waved, he awkwardly looked away.

On the fourth day of our trip, we finally saw Mount Baekdu, a dormant volcano and the highest mountain on the peninsula. It’s split between Korea and China. The bus dropped us off midway up the slope. From there, we took a path with stairs to the top, 2,750 meters (9,022 feet) above sea level. It was already starting to rain in the parking lot, and when we got to the peak an hour later, the entire area was covered in fog. No monsters lurked in Heaven Lake, which fills the volcano’s caldera.

North Korea’s border areas are reportedly its most prosperous, because the residents have easier access to smuggled goods from China. Still, for a country so outlandishly belligerent, the facade faded along the border. Near Changbai, we saw through a telescope a group of schoolchildren on a summer picnic. Amid the trees of a giant forest in Hyesan, kids dressed in their underpants were lined up in a row around an outdoor swimming pool. 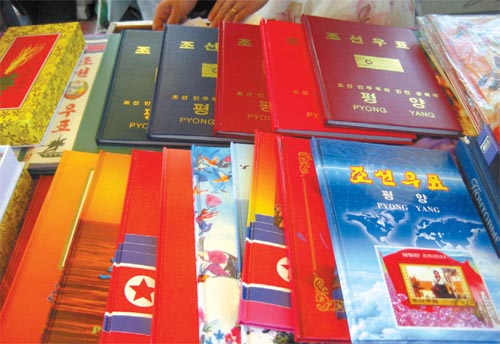 North Korean stamps and bills on sale at an observatory near the Tumen River. By Park Soo-mee

Maybe I had secretly anticipated more drama. But the tensest moment of the trip came when an armed Chinese guard stopped our bus near the North’s Supung Dam and looked through our photos.

Yet the grim realities of life in the North were evident in the slogans posted all along the border. Most praised the gracious leadership and celebrated the North’s achievements, but one stood out.

In bold red letters, the slogan read in Korean, “Let us march with smiles even when the journey is rough.” It was a very human chink in the armor, and it must have reflected the efforts of many North Koreans to keep living their lives in a land of poverty and danger.