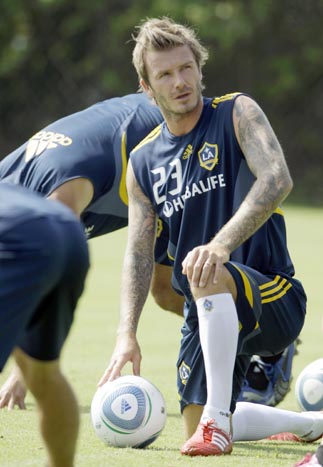 WEMBLEY, England - David Beckham’s international career appears over after England coach Fabio Capello said Wednesday the former captain is too old to play for the national team - without notifying him first.

Capello said the 35-year-old midfielder will have the chance to play in a friendly “farewell game” but will not be part of England’s team in qualifying for the 2012 European Championship.

Beckham has played 115 times for England, second behind only goalkeeper Peter Shilton’s 125 from 1970-90.

Beckham has repeatedly said he has no plans of retiring from playing for England. He went to the World Cup in South Africa in June as a member of Capello’s off-field staff after being sidelined following surgery related to an injury.

Appearing on ITV television in Britain, Capello was asked whether Beckham would be part of the England squad in the qualifying campaign for Euro 2012.

Capello laughed and said, “Thank you for helping me during the World Cup, but probably [he] is a little bit old.”

Later, after England’s 2-1 victory over Hungary in a friendly at Wembley, Capello said: “I hope he can play one more friendly game to say bye bye.”

“I won’t be picking him for any more competitive matches,” Capello added. “David is a fantastic player, he was really important, but we have to see the new players for the future.”

Capello spoke while Beckham was in the United States training with the Los Angeles Galaxy.

There was no immediate comment from Beckham, who was training with the Los Angeles Galaxy.

But a statement issued by his spokesman, Simon Oliveira, said: “There has been no discussion of retirement. He will always be available for his country, when fit and if needed he will be there.”

Speaking to reporters Wednesday in Carson, Calif., before Capello’s comments, Beckham said: “I’ve always said that I won’t retire from playing for my country, whether I never get picked again, play one more game or 10 more games. There are a lot of good young players coming through. We’ll see.”

The Galaxy said there would be no response Wednesday to Capello’s comments.

Current England captain Steven Gerrard expects Beckham to bounce back as he did after being initially dropped following the 2006 World Cup.

“I’m sure that if he hears that news, it’ll drive him on and he’ll try to prove people wrong and try to get back in because I know he loves playing for England,” Gerrard said. “He’s had some fantastic performances, some fantastic goals and memories. He was a fantastic captain. I’ve learned a lot from David and it’s been a pleasure to play alongside him.”

Beckham missed out on a fourth World Cup after tearing an Achilles tendon in March while on loan to AC Milan from the Galaxy to stay in shape for England during the Major League Soccer offseason. He resumed training Wednesday in California.

Beckham didn’t scrimmage with the Galaxy, but he participated in conditioning drills with training staff.

“The focus is on the team and preparing my tendon,” Beckham said. “I’ve been hitting it so hard for the last two years, every month that it’s obviously tough on my body. It’s about getting back this season as soon as possible, playing the rest of the season and then taking the time to get the rest in, prepare my body and be ready for next season.”

Beckham is on the disabled list and would not be eligible to play for the Galaxy again until Sept. 4 in Chicago at the earliest.

Beckham, who began his career at Manchester United in 1992, made his England debut against Moldova in September 1996.

The low point of his international career came at his first World Cup in 1998, when he was sent off for petulantly kicking out at Argentina midfielder Diego Simeone. England lost the Round of 16 match and some England fans hung effigies of Beckham.

Beckham managed to bounce back and captained the team at the 2002 World Cup under coach Sven-Goran Eriksson.

Beckham tearfully relinquished the England captaincy after the 2006 tournament, when England reached the quarterfinals for the second consecutive time. He was then initially dropped by coach Steve McClaren but was restored to the post as England’s qualifying campaign for the 2008 European Championship faltered.

McClaren was fired in November 2008 after England failed to reach Euro 2008.

Despite initially falling out of favor under Capello before being restored to the team when both were at Real Madrid, Beckham’s international career survived when the Italian coach took over from McClaren.

Beckham often only appeared as a late substitute but played a role in 16 of the 21 matches under Capello before he was injured three months before the World Cup in South Africa. Beckham was taken to the World Cup in a non-playing role by Capello.