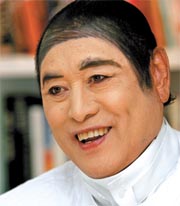 Korea’s iconic fashion designer Andre Kim died yesterday after being treated for pneumonia at an intensive care unit at the Seoul National University Hospital. He was 75.

Kim, born into a farming family in Goyang, in Gyeonggi, became a leader in the Korean fashion industry as the first prominent male designer in the country, and the first Korean to hold a fashion show in Paris in 1966. Known for his distinctive blend of classical designs with futuristic elements, Kim’s evening wear and wedding dress shows have been held in notable places throughout the world, including Angkor Wat in Cambodia in 2006, and Qingdao in 2007 to celebrate the coming of the 2008 Beijing Olympic Games.