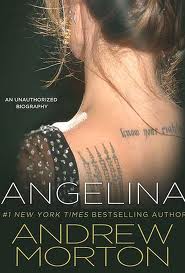 NEW YORK - Put Angelina Jolie’s face on a magazine cover, and sales will surely rise. Get her to write a memoir and it would be worth millions. But write a book about her, without her cooperation, and you are taking a chance.

Coming on the heels of her latest film “Salt,” a biography about the film star has been published. “Angelina,” by Andrew Morton, is out with an announced first printing of 150,000 copies and the promise of a “spellbinding’’ adventure.

Openly billed as unauthorized, the book includes intimate details of her troubled childhood, past lovers such as Billy Bob Thornton and Timothy Hutton and, of course, her years with Brad Pitt.

Morton has a strong commercial history, but the author is better when he works with a subject’s involvement (Princess Diana, Monica Lewinsky) than without (Tom Cruise, Madonna).

In the age of the Internet, the unauthorized biography has been increasingly scooped by instant, endless online gossip.

“Sales of tell-all celebrity biographies have been negatively impacted by the information that is available on the Internet or in print,’’ said Patricia Bostelman, vice president of marketing at Barnes & Noble.

“The Morton book is also competing with all the press Jolie has been getting around the launch of Salt, in which she is deliberately staying on message about her life with Brad and the kids. The audience for the book has often read all the key revelations prior to publication.’’

The Jolie book tells of her strained relationship with her father - actor Jon Voight - her cultish bond with Thornton and her ever-growing family with Pitt.

Identified sources include a childhood caretaker, an alleged former drug dealer and a close friend of Jolie’s mother, the late Marcheline Bertrand.

Unnamed friends and associates are cited for allegations that Jolie fought with co-star Winona Ryder on the set of “Girl, Interrupted,” and had been intrigued by Pitt long before they became involved.

A critique of Pitt’s ex-wife, Jennifer Aniston, is offered by “a psychologist who has met with Jennifer socially,’’ while insights on Pitt-Jolie are provided by a “psychologist in the Brad, Angie and Jennifer circle,’’ and “an observer with an inside track on the couple.’’

The unauthorized celebrity book was defined and mastered by Kitty Kelley, who in the 1980s and 1990s sold millions in hardcover alone with biographies of Frank Sinatra and Nancy Reagan.

Her latest, “Oprah,’’ was a hit by most standards, but not for Kelley, who herself has said that the Internet endangers her kind of book. The book has sold just 115,000 copies so far, according to Nielsen BookScan, which tracks around 70-75 percent of sales.

“The sales of Oprah were well below our expectations,’’ Bostelman said, adding that the book was still a best seller.

Beyond Kelley, there is a core of writers taking on familiar celebrities, including C. David Heymann (the Kennedys) and Edward Klein (Katie Couric, Hillary Clinton). But the market is so tough now that not even the death of Michael Jackson could expand it. Only a couple of Jackson biographies, briefly, were best sellers, among them Ian Halperin’s “Unmasked’’ and J. Randy Taraborrelli’s “Michael Jackson,’’ an updated edition of an older book.

“Everyone was on overload,’’ said Taraborrelli’s publisher, Jamie Raab of Grand Central Publishing.

“We put out the one book because it was essentially already written. By the time a new one would have come, people would have been satiated. There were many proposals floating around and we passed on them.’’

The celebrity books most likely to sell are those written by (or at least involving) the celebrities themselves.

Chelsea Handler, Tori Spelling and Mackenzie Phillips are among those with recent hits. While some memoirs flop, such as Sarah Silverman’s, more celebrities keep getting signed up. A month after Silverman’s book came out, Demi Moore reached a seven-figure deal with the same publisher, HarperCollins.

“There is a distinction between biographies and celebrity memoirs,’’ Bostelman says. “Celebrity memoirs seem to be gaining sales depending on the strength of the author’s platform and fan base.’’