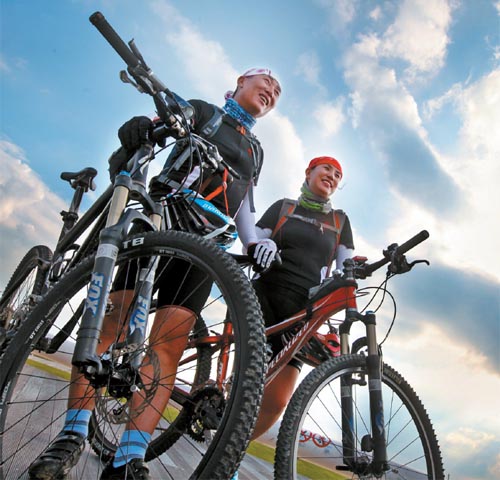 Kim Hyo-gyun first got into bicycling as a regular source of exercise, but he eventually convinced his wife Cho Eun-shil to come along on his treks across Seoul and the country. By Hwang Jung-ok


“When I first tried on the spandex biking outfit and looked in the mirror, I saw a ninja turtle with a protruding belly and backpack,” says Kim Hyo-gyun, recalling when he and his wife Cho Eun-shil first rode together.

Kim was the first to get hooked on cycling. He had been searching for a hobby that involved regular exercise and relieved stress when his friend mentioned mountain biking. That was more than three years ago.

“Many people assume that ‘mountain biking’ necessarily means riding on dangerous mountain trails, but it just means riding under the trees away from the asphalt-covered roads. In fact, the nature trails are safer and much better in terms of scenery.”

Cho picked up mountain biking five months later at Kim’s urging. At first, she struggled to keep up with her husband. “On my fourth or fifth time on a bike, I followed my husband to Jeju Island with his circle of cycling friends. On the day we arrived, we rode the bicycle from 9 in the morning to 10 in the evening,” says Cho. This was when she still barely knew how to switch gears.

She thought many times of quitting during the 13-hour bike ride, but stuck it out till the end because she saw it as a matter of self-discipline.

Since the Jeju trip, the couple has been on numerous bicycle outings, including to the Peace Dam in Hwacheon and to Shin and Jangbong islands in Incheon.

On that last trip, the group of bicycle buddies decided to give each other nicknames. Kim and Cho’s are “Kevin” and “Laura.” Other nicknames for their group’s members include “Ann,” “Brown” and “Scarlet.” At that time they were so absorbed by the process of making the nicknames that they missed their stop on the ferry.

When staying overnight is too much of a hassle, the pair likes to start in Seoul and ride to Gyeonggi and back. Another favorite route of theirs is to head through Daechi-dong and Mok-dong, then touch-base in Gwangmyeong and Anyang before heading back. The weather seems mercilessly hot, but Cho says that the wind blowing away the beads of sweat on one’s forehead is the best feeling in this weather.

“Another appeal of cycling is the fact that you can enjoy the scenery. The flora and fauna from Seoul to Haengjusanseong Fortress [in Goyang, Gyeonggi] changes with the season,” she explains.

“I appreciate the fact that I’m able to climb mountains and travel on my bike in my fifties,” says Kim. Since they began riding, their married lives, not to mention their physical conditions, have improved. This summer, they are taking on the challenge of a three-day course from Manhangjae, Gangwon, to Sangdong, North Jeolla.

“There is supposed to be a killer hill on the way to Taereung Training Center. It’s a very advanced course, but we’re giving it a shot this summer,” says Kim.

Basic travel gear is a must for a safe cycling trip. According to Kim Young-sun, a mechanic at Biclo bicycle shop in Banpo-dong in southern Seoul, “You need a rack behind the seat to carry luggage, a bottle cage for your water bottle, front and back lights and a map. In case of flat tires, you also need to have a pump with you.”

A touring bike comes with all these accessories, but with regular bikes, they have to be separately purchased.

The rack, which is often considered the “back seat” of a bicycle, should be limited to carrying 30 to 40 kilograms (66 to 88 pounds) to avoid putting too much pressure on the back wheel. Even when attaching luggage to each side of the wheel, the weight must be balanced on both sides.

In case of punctured tires or undone chains, a carry-size pump and emergency tools are needed at all times. Basic education on repair and maintenance is also crucial. Part of this is knowing how to read and understand the pressure of the tires.

“Tires go flat more easily when there is an external shock on limp tires. The optimum pressures of different tires vary, but with touring tires, it’s around 70 to 80 psi,” says Kim. The tires should be taut when pressed with the fingers.

Two bottle cages is also a good idea. The trick is to drink frequently in small amounts. Cell phone, money, and other personal items should be put in a plastic bag to protect against rain or sweat.

Cycling during the monsoon season requires extra precautions. Consistently exposing the bicycle to rain or morning dew reduces the life span of the bicycle. It is best to keep them indoors. Any mud or residue after a ride should be washed and dried. The chain and cables especially should be oiled to prevent corrosion.