More bicyclists saying, ‘Fixie me up’

More bicyclists saying, ‘Fixie me up’ 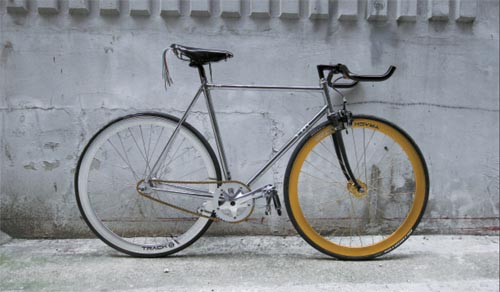 Many riders assemble their own fixed-gear bicycles out of parts bought online, resulting in a one-of-a-kind vehicle like the one above. Provided by LSD Bikes


The bike’s front tire was light blue, and the back tire was white. The wheels have different numbers of spokes. And there are no brakes.

This is a fixed-gear bicycle, nicknamed a “fixie” by devotees, and it’s as much a fashion item as it is a mode of transportation. With a simple design owing to the lack of gear shifting and brake wires, a fixie is like a blank slate, waiting to be personalized with spoke cards and colorful custom patterns. And fans say the bikes are practical too, because they almost never break.

Though they’ve been common in the United States for years, this most basic form of two-wheeled ride just began slowly catching on here in 2008. Several bike shops now sell fixies as well, some exclusively. Even though they can cost 500,000 won ($422) or even up to 1 million won, the number of orders has continued to increase.

Lee Ui-jung, owner of LSD Bikes, a specialty manufacturer of custom-made fixies since July 2008, said that he posted 100 million won in sales during first half of 2010. “When we first opened a shop in 2008, we only got one custom-made order each week, but nowadays we get around five to seven customized bike orders per week,” said Lee, who estimated around 15,000 people ride fixed-gear bikes in Korea.

The reason fixies haven’t caught on with the wider public is how difficult they can be to ride. Since the gears are attached to the pedals, one can’t coast down a hill.

The first group to begin adopting fixies, here and elsewhere in the world, was urban bicycle messengers, who found them convenient and reliable.

Fans also say they enjoy the feeling that the bike is an extension of the body. Only on a fixie is it possible to pedal backwards, for example, enabling a tricks impossible with a regular bike. “This kind of pedaling is only available on a fixed-gear bike, and I think that’s the bike’s biggest charm,” said Lee.

The lack of a separate braking system can also be an aesthetic choice, but experts like Lee recommend beginners start with brakes installed until they get used to stopping the bike with the pedals and handlebars.

“It does not look cool enough with a braking system. I got it detached as soon as I was sure that I was confident and skilled at stopping the bike,” said college student Paik Yoon-suk, who first assembled his own fixie back in 2008. 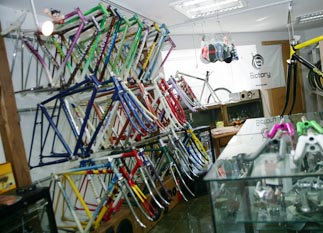 Paik recalled that it was almost impossible to obtain the parts at the time, so he had to contact many domestic and international sources and plan ahead carefully. Now there are many blogs, online cafes, and Web sites with information on where to get specific components.

To assemble a fixie, one needs to pick a basic bike frame, wheels, handlebars and grips, chains, a crankset, a drivetrain, freewheels and cogs, stems and a saddle. All these parts can be selected and used to build a one-of-a-kind bike. Fixie Web cafes and sites are also a good source of tips on learning how to ride a brakeless bike.

Of course, fixed-gear bikes are universally used by a certain class of cycling athlete. The thrill of riding a brakeless bike and pulling off tricks in the city transforms cycling into a type of extreme sport.

“Some people attach different-sized wheels to the bike, with a smaller one in front than in back so that they can make a spiral trajectory as they brake,” said Paik.

The prospect of a vehicle rolling down a busy street with no brakes is naturally worrying to some, but most fixie riders have put in hours of time buying, assembling and practicing to ride safely.

When climbing uphill, a fixie requires the cyclist’s calves to flex and strain constantly, which actually prevents them from speeding. “Riders would not go out on a street risking their lives unless they are confident and feel safe,” said Paik. “If there are people staring, I believe it’s only because they envy the color and uniqueness of the bike.”

Amateur cycling veteran and Arirang TV producer Kang Ho-sun dismissed the idea that fixie riders were a menace. “I believe that all fixie riders are aware of the danger they are facing, and they would not ride it outside unless they were confident enough.”