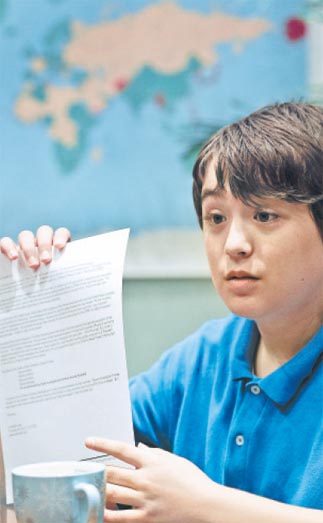 A teenage American boy says he is traveling to North Korea this week with a letter urging leader Kim Jong-il to allow the creation of a “children’s peace forest” of fruit and chestnut trees that would grow in the heavily armed border between the Koreas.

“You may be wondering why a 13-year-old boy wants to go into North Korea, especially right now when there are a lot of problems,” Jonathan Lee, a Korean-American from Mississippi, wrote in his letter.

“Well, I’ve been talking about planting chestnut trees in North Korea for the past three years. The reason I have is because I want to help the environment and help the people at the same time. Now is the right time because many wish for peace right now on the Korean peninsula.”

Tensions have been simmering between the two Koreas since March when a South Korean warship sank in an attack that Seoul blames on Pyongyang. The sinking, which the North denies any role in, killed 46 sailors and led Seoul to launch a series of huge naval drills.

A youth environmental activist who founded the Mississippi-based International Cooperation of Environmental Youth - Helping Our Polluted Earth, Jonathan was first moved to pursue the idea of planting chestnut trees on the Korean Peninsula when he met with former South Korean President Kim Dae-jung three years ago.

“His wish for peace between the two Koreas made an impression on me,” he wrote in his letter, recounting the meeting celebrating the anniversary of the two Koreas’ 2000 summit.

“Korea has been divided for 60 years and has been officially at war during this time. The children of these countries have never met or interacted with each other. Personally, I think this is sad,” he said.

Jonathan traveled earlier this week to China to deliver his letter to Chinese President Hu Jintao. He has already sent the proposal to South Korean President Lee Myung-bak and U.S. President Barack Obama.

Jonathan’s eight-day trip to the communist nation started on Thursday and will include a meeting with a North Korean government official, his father, Kyoung Lee, says. He declined to elaborate.

“I’m slightly nervous since this is my first trip to North Korea. However, I have high expectations,” Jonathan said before he left Beijing for Pyongyang.

Jonathan and his parents have gained approval for entry despite there being no diplomatic relations between Pyongyang and Washington. Since January, a U.S. citizen named Aijalon Gomes has been held in North Korea for illegal entry.

Kyoung Lee believes that safety for his son and his family are guaranteed because their visit was made possible through the North’s U.N. representative in New York.

The family says that they also requested a meeting between Jonathan and the 68-year-old North Korean leader, Kim Jong-il. But the North has only mentioned the possibility of a meeting with a “senior” official.

If Jonathan’s wish to plant a forest of chestnut trees in Panmunjom, along the border between the two Koreas, did come true, it would be in a stark contrast to the surrounding area that is heavily fortified with barbed wire and military personnel, he believes.

Panmunjom, the village where the truce that ended the 1950-53 Korean War was signed, lies within the Demilitarized Zone, a four-kilometer-wide (2.5 miles) swath of land bisecting the peninsula.

Jonathan says his chestnut trees would “not only help the environment, but would also provide food for the North Koreans.” The North has been suffering from decades of food shortages and deforestation - a consequence of people cutting down trees to plant crops for their survival.

“Above politics; Above conflicts; Above borders; Above ideology; It’s all about giving hope to people and children around the world,” Jonanthan says, referring to his motto for the forest.

“This is the most important part of the letter that Jonathan would like to emphasize,” his father said.

Jonathan’s group, also known as I.C.E.Y.-H.O.P.E., raised funds in South Korea last year and delivered them to the North for use in planting chestnut trees.