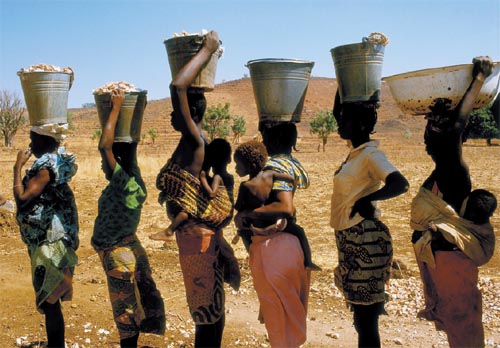 This photograph taken by Liba Taylor of women in Ghana carrying stones for the construction of a well is on display at the African Art Museum in Yeongwol, Gangwon as part of an exhibition called “The Innocents.” Provided by the Czech Embassy


Liba Taylor didn’t specifically set out to become a professional photographer, let alone work as one for non-profit organizations and spend a great deal of time snapping shots in Africa.

It just kind of ended up that way.

“Things happen by accident,” Taylor said in an interview with the JoongAng Daily early last month at the Czech Embassy.

Although she grew up in communist-run Czechoslovakia, which was closed off from much of the world, Taylor eventually left the country and wound up working with an NGO performing work in Africa, marking the start of her career in photography.

Taylor visited Korea last month to celebrate an exhibition of her work at the African Museum in Yeongwol, Gangwon.

“The Innocents,” which runs until Sunday, features a collection of the shots Taylor took in Africa over the past 20 years for the United Nations and various non-profit organizations.

During her recent interview, Taylor touched on her decision to leave the Czechoslovakia, her career path and what she loves most about Africa.


Q. Why the particular interest in Africa? 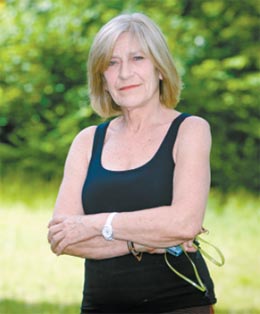 A. It goes back to my childhood. While I was growing up in Czechoslovakia, I loved reading books about other cultures. I always listened to a radio program featuring a couple of Czechoslovakian travelers talking about their adventures across Africa. Ever since then I just read as many books on Africa as I could.

I imagine it was difficult to travel outside your country when you were growing up, given the political regime at the time.

I always wanted to travel to other countries. I didn’t like the fact that we were locked in. So in 1968, during Prague Spring [a period of liberalization in the country], I had a good opportunity to get out.

I was 18 at the time, and I went to London thinking I could learn some English and then travel to nearby countries. I ended up traveling to France and Iran, and I was in Mexico in 1973.

Soon after Czechoslovakia closed the borders again, and no one could get into or out of the nation easily. So I just decided to stay in England.

How did you start your career as a photographer, and especially one with an NGO?

I learned photography in college, but back then I wasn’t really aware of the type of work NGO’s do. I randomly met a writer in London who suggested that I work for a non-profit doing work in Kenya.

In the early 80s, NGOs didn’t really focus on showing their work to the public visually. They just used pictures from people who traveled the area. After they realized the need to show people what is happening in Africa through pictures, they decided to bring on professional photographers, and I was one of them.

As part of the job, I even randomly met Angelina Jolie in Sierra Leone before she became a goodwill ambassador for the UN High Commissioner for Refugees and took a picture of her and children, which later made the cover of her published travel journal.

What is Africa to you?

Africa is a little bit like a dreamland to me. There is something there that you can’t experience in Europe anymore.

Whenever I go there, I feel free, like I can do anything surrounded by a beautiful landscape that has not been touched by human beings. Kenya was the first African country I visited, and then I went back there countless times.

What is your next step?

I’ve been asked to teach at New York University in Prague starting this fall. And then I don’t know where I will be next.