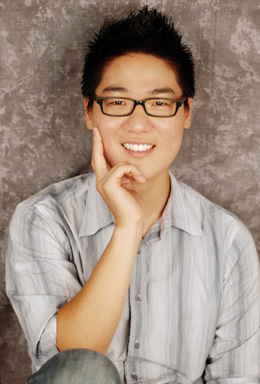 Allen Kim, a Korean-American senior at the University of Michigan, has been named one of five finalists for Entrepreneur Magazine’s 2010 College Entrepreneur of the Year award.

Several thousand candidates submitted their business ideas to the California-based monthly in early June, but only five were selected as finalists. Kim was also the first Asian to make it to the last round.

So what is Kim’s big idea? He sums it up as “Netflix for baby clothes,” referring to the popular U.S.-based postal-order DVD rental service.

Kim was born in the United States while his father was studying for his doctorate at the University of Michigan and came back to Korea when he was five years old. He attended elementary and middle school here, but went to the U.S. with his mother for high school and college.

Kim’s idea, to rent out baby clothes for special occasions such as church services or weddings for a fixed monthly fee of $15, was inspired by his cousin, who recently had a baby and complained about how expensive those outfits were.

“Parents need to pay more for babies’ clothes for special occasions, but babies wear them less often and grow out of them faster,” said Kim. “There’s a huge inefficiency in those baby clothes and I thought that there has to be a more sustainable and efficient way for parents to clothe their kids.”

According to Kim’s calculations, parents can save up to 75 percent in expenses for baby clothes with the rental service, compared to buying brand new apparel.

Talking to hundreds of mothers who recently had babies also convinced Kim and his business partner, Luis Calderon, that there would be huge demand for such a service. They also discovered that while mothers can grow attached to the clothes their babies wear every day, that’s not true for their Sunday best.

In addition to outfits for special occasions, Kim also plans to rent out outfits from luxury brands such as Polo Ralph Lauren and Juicy Couture. That way, babies can wear luxurious and fashionable clothes a few times at far below retail price and return them when they grow out of them.

Kim and Calderon have already initiated a pilot program on their site, Bebaroo.com. When their Web site went live, more than 70 customers requested invitations to join the beta testing phase, but Kim and Calderon had to limit the pool to 20 whom they thought were representative of their target demographic: busy, ambitious working mothers in their early 30s conscious of fashion and style and belonging to the upper middle class.

According to Kim, the clothes on the site will need to be rented six times before Bebaroo begins to see any profit.

“We will purchase the clothes at wholesale prices, so after they get rented out and returned six times on average, we will be able to recover our initial investment,” said Kim. “After that, it’s all profit.”

Kim added that in order for the business to be profitable, the most critical aspect will be the washing, repairing and sanitizing of the clothes. Kim said he will make sure that the clothes for rental meet strict standards for cleanliness.

For now, Kim and Calderon are planning to outsource the cleaning and repair to another company.

“We hope to get good deals with other businesses for cleaning, repairing and sanitizing the clothes. But when Bebaroo grows into a big business, we might be able to bring those services home,” said Kim.

If Kim wins the magazine competition, he will receive a $5,000 cash prize and an opportunity to be featured in the February 2011 issue of Entrepreneur. The final winner will be announced in late September based on the results of an online poll scheduled to continue until Sept. 10, and on voting by a panel of five judges.

“I’ve been interested in entrepreneurship since I was in high school and always wanted to have my own business,” said Kim, who has been involved in MPowered, a student-run entrepreneurship organization, since his freshmen year of college.

“In that sense, I am living my dream now. I gave up my internship at Samsung this summer to work on this. The most important thing for me right now is to establish this company well and run it successfully.”