Volunteers return favor from 60 years ago

Volunteers return favor from 60 years ago 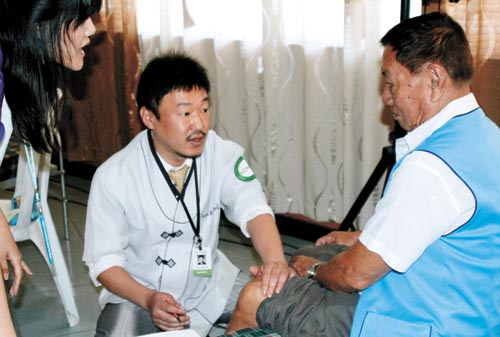 Lee Won-uk applies acupuncture on 82-year-old Bartolome C. Catolo, who fought in the Korean War when he was 22. Provided by the Korean Medicine Service Team Abroad


Despite the scorching heat, a long line formed in front of the auditorium at Villamor Air Base a few miles south of Manila on a sweltering day last month.

The line consisted of locals waiting their turn for free medical treatment from the Korean Medicine Service Team Abroad.

Among them, about 20 elderly men in berets and sky-blue vests, complete with the miniature flags of Korea and the Philippines sewn on them, stood out in the crowd.

When the Korean medical volunteers raised their hands in salute, the men returned the gesture.

Each of these men, now in their 80s and 90s, served with the Philippine Expeditionary Forces to Korea, a contingent of soldiers dispatched to fight in the Korean War.

With this year marking the 60th anniversary of the outbreak of the war, the medicine service group organized a volunteer trip to express gratitude to Filipino veterans.

Most of the former soldiers treated during the trip suffer from arthritis or high blood pressure. The five doctors on hand provided acupuncture and physical therapy to help those ailments and even provided medicinal herbs for those interested in Oriental medicine. Aside from the veterans, the group treated patients from the local community as well.

“Korea developed so much in the past few decades,” said Jovenuo P. Dominguez, 79, who received treatment for high blood pressure. Dominguez was dispatched to Korea when he was 19 and fought in Cheorwon. He lost hearing in his right ear from bomb explosions.

“Although it was difficult to work and make a living because my hearing is impaired, I am very thankful and proud that my sacrifice during the Korean War contributed to what Korea has become now,” he said.

“I hope the Korean government and the people will not forget our sacrifices.”

The Philippines dispatched about 7,400 soldiers to Korea during the Korean War.

Among them, 116 were killed in action and 16 went missing. Another 299 were wounded in battle during the conflict.

“It was very rewarding to repay the debt we owed to the Filipino veterans who sacrificed their lives for Korea,” said Lee Won-uk, head of the medical team.