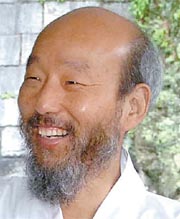 Seoul said yesterday it was preparing to arrest a leftist South Korean pastor for making an unauthorized trip to North Korea, where he made remarks against the Lee Myung-bak administration.

Rev. Han Sang-ryeol, 60, is scheduled to return to South Korea through the truce village at Panmunjom on Aug. 15, Liberation Day after spending two months in North Korea.

According to the prosecution officials, an arrest warrant for Han has already been issued on the charges of violating the ban on South Koreans visiting North Korea without permission and violating the National Security Law for anti-government remarks he made while in the North.

The Lee administration is “committing anti-reunification and treacherous crimes by cutting off inter-Korean relations,” Han was quoted as saying in Pyongyang, referring to Seoul’s trade sanctions following the sinking of the Cheonan.

North Korea’s Red Cross has sent a letter to its South Korean counterpart requesting safe passage for Han on his return.

Analysts suspect that the North may use Han to exert pressure on Seoul.

North Korea may demand that South Korea not arrest Han in return for releasing the South Korean fishing boat Daeseung 55 and its seven sailors captured last weekend, according to observers.

The North’s notification of Han’s return was received hours after the South sent a message through the Red Cross asking for the immediate return of the Daeseung 55. The North has not yet commented on the vessel’s capture.

A plan by Han to cross through Panmunjom without an agreement by the UN Command is a clear violation of the armistice, said a Unification Ministry official. Han, a co-founder of the Korea Alliance for Progressive Movement, a pro-unification civic group, entered the North on June 12 through the North Korean embassy in Beijing.

Han is the first case of an unauthorized visit to North Korea by a South Korean since 1989, when Im Su-gyeong, a student activist, returned from a banned trip to Pyongyang and was arrested.