Wyverns are able to neutralize Lee

Wyverns are able to neutralize Lee 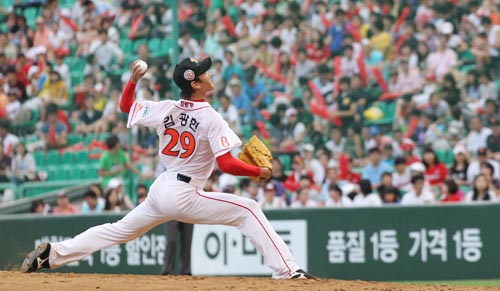 Lee Dae-ho has been the most dominant hitter in the Korea Baseball Organization this season, boasting an impressive mix of power and contact. While Lee has been an indomitable force for the Lotte Giants, one team has been able to neutralize Lee in the batter’s box - the SK Wyverns.

Lee boasts a .367 batting average with 38 home runs against six other KBO clubs, but has been merely a shell of his usual self against the Wyverns, hitting .184 with no home runs. Despite Lee’s struggles against the league-leading Wyverns, SK manager Kim Sung-geun has been quick to praise Lee and downplay his team’s success against the burly slugger.

“Hitting home runs in nine consecutive games is truly an impressive record,” Kim said. “He is in position to hit for the Triple Crown this season. It goes without saying that Lee is a strong favorite to win the Most Valuable Player honor. 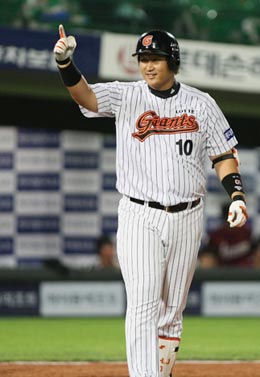 Lee will be eager to make up for past poor performances against the Wyverns when he faces the 14-4 Kim, who is a formidable challenge that gets Lee’s competitive juices flowing.

“Lotte’s batting order is one of the strongest in the league,” Kim Kwang-hyun said. “Lee has been strong even against the inside pitches of late. I’ve given up on the thought of pitching a scoreless game. I will look to minimize the runs scored.

“I know that Lee has yet to hit a home run against our club this season. I will look to continue that streak.”

Kim has not been particularly strong against Lee in his career, giving up eight hits in 25 meetings. Kim has allowed two hits in four meetings against Lee this season. But Kim has been able to clamp down in key situations, allowing just one RBI and no home runs to Lee since his 2007 rookie season.

Lee should also be concerned about the dominant SK bullpen. Jeong Dae-hyun who boasts an underhand release is known around the league as a “Lee Dae-ho slayer.” Jeong has held Lee hitless in four meetings this season. In the all-time matchup between the two players dating to the 2007 season, Jeong has been nearly flawless, allowing one hit to Lee in 25 meetings.

“Jeong Dae-hyun has an odd angle of release that makes it hard for right-handed batters,” Kim Sung-geun said. “It should not be an easy matchup for Lee.”

SK’s closers Lee Seung-ho and Song Eun-beom has also fared well against Lee this season. Lee has not allowed a hit in four appearances and Song has been flawless in seven meetings.

Making the challenge more difficult for Lee will be the absence of designated hitter Hong Sung-heun. Hong, who was leading the league in RBI (113) and runs scored (86), suffered a season-ending injury to his left hand when he was hit by a pitch thrown by Kia closer Yoon Suk-min in the top of the ninth inning on Sunday. Hong posted a .333 batting average and eight RBI against SK this season - leading Giants batters in those categories.

It remains to be seen how Lee responds to the absence of Hong in the lineup. So far this month, Lee and Hong had combined for 59.1 percent of the 22 total home runs hit by their team and 47.7 percent of the 65 total RBI.