Fans gather at Graceland to remember the king

Fans gather at Graceland to remember the king 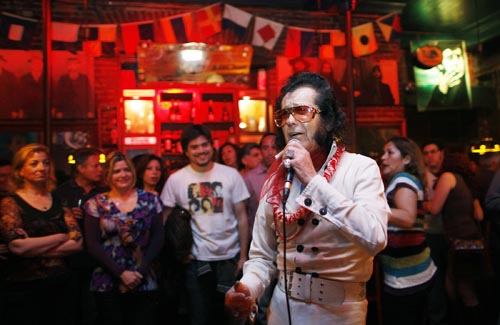 Marcelo Rossi, 75, an Elvis Presley impersonator, sings during a performance marking the 33rd anniversary of the king’s death, at a restaurant in Valparaiso, Chile Sunday. [REUTERS/YONHAP]


Elvis Presley fans from around the world flocked to Graceland on Sunday for the annual late night procession past the king of rock ’n’ roll’s grave.

Presley died at his Graceland mansion on Aug. 16, 1977. The procession is the highlight of a weeklong series of fan-club meetings, film showings and Elvis impersonator contests. Elvis purchased the 13-acre (5.3-hectare) Graceland property in 1957 for a song - just a bit more than $100,000.

Dozens of multicolored but empty chairs lined the walls of Graceland on Sunday afternoon, their early-arriving owners seeking refuge from 100-degree (38-Celsius) temperatures at water stations.

The procession usually attracts several thousand fans and runs into the morning hours. Fans usually leave flowers, teddy bears and other items at the grave site, which also is the resting place of Presley’s father Vernon, his mother Gladys and grandmother Minnie Mae.

Paul Fivelson came from Chicago to meet up with a buddy he met at the vigil three years ago. Wearing shorts and a black Elvis Week T-shirt, Fivelson said he likes to be near the front of the line to meet interesting people as they walk by the famous stone wall, which has personal messages from fans written on it.

Fivelson, 58, said he takes pride in being “a die-hard Elvis loyalist” who listens to the American icon’s music every day. His granddaughter’s name is Presley.

“I miss him, I loved him,” said Fivelson, a substitute teacher. “To be part of the Elvis experience and the aura of the whole thing, just means everything in the world to me.”

Before the procession, fans from as far as Japan and England browsed Graceland’s sprawling souvenir shopping center and gathered under a large tent across the street from the mansion to listen to performers belt out Elvis tunes.

Shelley Somerville flew from Australia with her husband for their honeymoon. Hours before the procession, she held an umbrella to shield herself from the sun. It’s the third candlelight vigil for Somerville, who said she likes Elvis’ gospel music the most.

“Elvis has touched a lot of hearts, and there’s something spiritual about him,” said Somerville, a 31-year-old administrative assistant. “There’s a calming feeling around him.”

The week’s festivities included conversations with writers, photographers and close friends of Elvis, including Joe Esposito, part of the Elvis entourage nicknamed the “Memphis Mafia.”