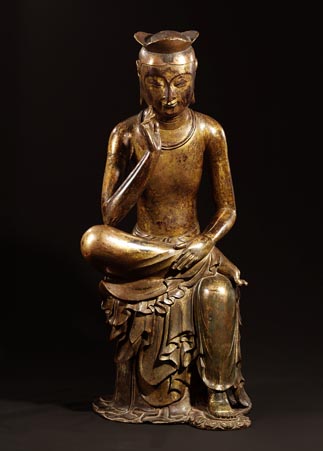 
With a calm aura, this Buddhist statue appears to be in deep meditation with one leg resting on its knee, and fingers placed on one cheek. Statues in such positions derive from images of Siddhartha Gautama, who pondered the four phases of human life: birth, old age, sickness and death. The statue wears a tall crown ornamented with carvings of the sun and moon. This type of crown originated from Sassanid Persia, and as it spread eastward on the Silk Road, it was used for the crowns of Boddhisatvas. With its enigmatic smile, natural sitting position, harmonious proportions and smoothly flowing clothing and waistband, this Boddhisatva exhibits a sophisticated sculptural style that can be differentiated from another Buddhist statue, National Treasure No. 83.