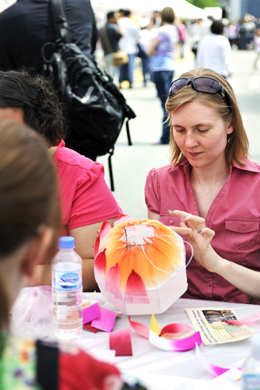 An expat makes a yeondeung, a lotus-shaped lamp widely used to decorate Buddhist temples in Korea.

Judith Staines, a British freelance art consultant, visited Seoul last month to attend an international culture conference, after which she hoped to take a nice tour of Seoul. Her tools: a tourist guidebook that she obtained back in England and packets she picked up from a tourist information center in Seoul.

But Staines said she felt like a lost child. Though she had lists of locations and names of restaurants, performances and other activities, she wasn’t satisfied with the Seoul city government’s international tourism policies.

“I wish I could get first-hand information on places, restaurants and other activities favored by expatriates,” Staines said. “There is tons of information in the book and packet, but I can’t decide where to go because I can’t tell whether I will like that place, as some of them seem like a bit advertorial.”

International visitors like Staines will be able to narrow down their choices starting this month, when the Seoul city government releases the results of a survey on expatriates’ favorite areas of Seoul ahead of the G-20 Summit in November.

Expatriates in Seoul judged Myeong-dong and Dongdaemun their top shopping areas and Hongdae their No. 1 nightlife location, while they choose makgeolli rice wine as their favorite traditional Korean drink, according to the survey conducted by the Seoul city government and Seoul Tourism Organization whose results were released on July 29. 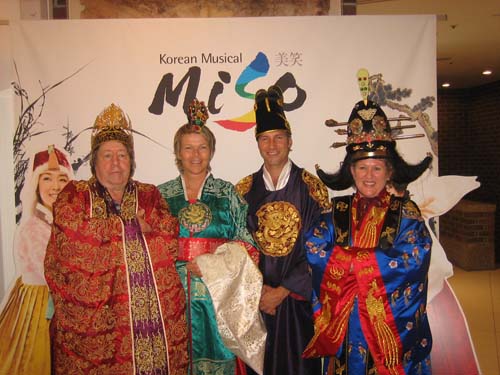 Asked to name their favorite area for walking, expats gave two thumbs up to Samcheong-dong, famous for its thick woods, cozy restaurants, cafes, craft shops and art galleries. Other winners were Cheonggye Stream, Insa-dong, and Doldam-gil (“stone wall street”) near Deoksu Palace, a popular destination for couples and families on weekends.

Cathy Carcia, who participated in the survey, points to Hongdae as the best place to get a glimpse of the cultural lives of young Koreans. She said she feels energized whenever she stands on the streets of Hongdae, occupied by vintage clothing vendors, artists, galleries and cozy cafes.

It’s not just Hondae that Carcia has fallen in love with.

“I never thought Myeong-dong was a monotonous place, and I guess that’s the most appealing thing about it,” Carcia said, describing her top shopping spot. “Whenever I get there, I can’t get home without full shopping bags. 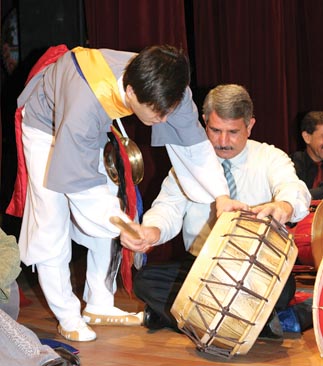 An expat plays a janggu, the drum used in samulnori, Korean traditional percussion.

“Myeong-dong seems like an area that endlessly changes on the surface, but when you get into small alleys, you can find old restaurants that serve delicious food.”

The top three most popular Korean dishes were galbi (grilled beef ribs), hanjeongsik (a meal of rice, stew and dozens of side dishes) and bibimbap, steamed rice with mixed vegetables and spicy sauce, the survey found.

For instance, your Korean food tour could also include a Buddhist experience at Jogye Temple in the morning, with bibimbap and pajeon pancakes at lunchtime followed by a tour of Insa-dong, the Tteok (Korean rice cake) Museum and the N Seoul Tower on Mount Namsan, rounded out with bulgogi (marinated beef) for dinner. The Web site provides contact information for tour agencies that can help.

“The survey showed what are some other places and areas adored by foreigners, though Myeong-dong, Insa-dong and Dongdaemun have long been regarded as the major tourist attraction sites,” Lee Hae-wu, a Seoul city government’s tourism promotion bureau said. “We will continue developing tour courses that foreigners find them interesting.