Korea: an example and now a partner

Korea: an example and now a partner 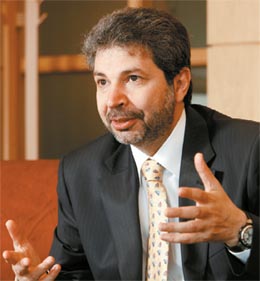 Saudi Arabia has closely observed both Korea’s rise from an undeveloped country to an influential member of the Group of 20, and its experience of coping with the international financial crises, said Saudi Ambassador to Korea Ahmad Al-Barak.

In an e-mail interview with the JoongAng Daily, Ambassador Al-Barak said he has high expectations for further growth of bilateral ties, and would urge Korean businessmen to pay more attention to investment opportunities in his country.

As the only Arab member of the G-20 and the only member to belong to the Organization of Petroleum Exporting Countries, Al-Barak said the kingdom supports the mission of the G-20 to establish a framework for strong, sustainable and balanced growth. He emphasized the need to strengthen the group’s credibility as the premier forum to discuss global economic issues.

For the upcoming November summit, the Saudi government hopes to address the restructuring of international financial institutions and global financial governance to reflect changes in the world economy.

Among the issues to be addressed at the Seoul summit will be the completion of quota reform at the International Monetary Fund (IMF). At last year’s summit, leaders agreed to shift at least 5 percent of IMF votes to emerging economies. The initial deadline was January 2012, but the leaders agreed at their meeting in Toronto in June to complete the task at the next summit in Seoul on November 11 and 12.

“Among the measures is the announcement that the kingdom will allocate $400 billion to an investment program in the public and petroleum sectors for expenditure on basic services projects to strengthen the absorption capacity of the national economy over the next five years,” he said. “And the kingdom has already fulfilled a large part of this commitment.”

The Saudi Arabian Monetary Agency has pursued a policy designed to achieve stability in the financial sector and provide the liquidity to meet local credit demand, the diplomat added. “The agency has taken a number of proactive measures to strengthen liquidity and lower the cost of borrowing in order to ensure that the banks can continue to play their role in funding the kingdom’s development process and to encourage banks to direct liquidity to various productive sectors.”

Al-Barak spoke about his expectations for the relationship between Saudi Arabia and Korea, noting that bilateral trade has seen steady growth.

“The two countries witnessed remarkable progress as a result of the summit between The Custodian of the Two Holy Mosques King Abdullah bin Abdul Aziz Al-Saud, king of the Kingdom of Saudi Arabia, and the late former president Roh Moo-hyun in Riyadh in March 2007,” he said. “There also were talks held between Roh and His Royal Highness Crown Prince Sultan bin Abdul Aziz Al-Saud.

“Such developments were indicators that bilateral relations have entered a new phase of promotion and development,” the ambassador said, adding that seven agreements were signed during Roh’s visit to the kingdom.

“Korea is one of the most important countries for the kingdom in terms of economic relations and international order, as a developed country with a useful and impressive development experience, as well as its international influence as a G-20 member.”

He called Korea one of the kingdoms most important trade partners.

“Trade relations between Saudi Arabia and Korea have witnessed steady development, which is reflected by the whopping 300 percent growth in trade volume between the two countries during the last five years,” he said. “Korea is ranked third among countries that receive Saudi exports. And Korea is ranked sixth among the top 10 exporters to the kingdom.”

Al-Barak also said nearly 100 joint venture projects are currently ongoing between the two countries, including industrial programs. He hopes more Korean businesses will show an interest in the Saudi economy.

“It should be noted that the investment environment in the kingdom has topped the list of Arabian countries to attract foreign investments according to World Bank resources,” he said. “The kingdom also ranked 23rd worldwide in the same field.

“In this regard, I would like to invite Korean businessmen and companies to participate once again in the process of the kingdom’s development by joining hands with their Saudi counterparts in joint venture projects and sustaining the solid trade and economic relations between the two countries.”