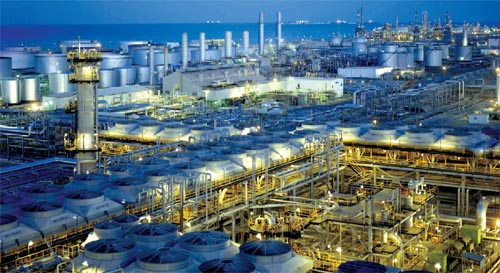 The Saudi Aramco Ras Tanura refinery is located in eastern Saudi Arabia. Provided by the company

Korea’s economic relationship with Saudi Arabia looks to have a bright future as more local companies open offices in the Middle East.

Saudi Arabia is Korea’s No.1 trading partner among countries in the region, and it provides more of Korea’s petroleum than any other country - 31.8 percent of Korea’s crude oil imports, or 265 million barrel worth $16.8 billion, came from Saudi Arabia last year.

Top Korean exports to Saudi Arabia include transformers, tires, air-conditioners, motor vehicles and polyester fabrics. Saudi conglomerates with operations in Korea include Saudi Aramco and SABIC, all specializing in petroleum or petrochemicals.

The state-owned national oil company Saudi Aramco, which owns a large share of local refinery S-Oil, has been a particularly prominent client of Korean construction firms.

“We’re now building a 400,000-barrel oil refinery in Saudi Arabia, and Korean companies including Daelim, Samsung and SK are our contractors,” said Bander Damdam, a senior project engineer at Saudi Aramco. “We have representatives at each Korean company involved in the joint project. We have offices at SK, Daelim, Samsung, S-Oil, Hyundai and GS. At all the contractors we are working with, we have offices in Korea.”

Although Damdam declined to reveal just how valuable Saudi Aramco’s projects are to Korean builders, he said he expects the number of those joint projects to continue to grow.