Children from multicultural families hold hands with members of Jaeneung-nanoomi, a group of high schools that tutor and play with the kids at the Gimpo Multicultural Family Support Center, in Gimpo, Gyeonggi, on Aug. 7. By Jeon Min-kyu


As more and more multicultural families decide to settle in Korea, community service groups are stepping in to help adults and their children adapt, facing cultural and linguistic challenges that only grow more severe as the years pass.

With the increase of international marriages between Korean men and Asian women of non-Korean descent, the number of multicultural families here increased from 140,000 in 2008 to 167,000 in 2009, according to Statistics Korea. A multicultural family refers to a family in which the two parents have different cultural and ethnic backgrounds. Multicultural families generally face language barriers as well as various other problems in the process of settling in Korea.

To help these families, people from elementary school students to senior citizens in their 60s are forming community service groups to help around the nation. Jaeneung-nanoomi is one such group.

Formed by six students from foreign language high schools in Gyeonggi, Jaeneung-nanoomi visits the Gimpo Multicultural Family Support Center on Saturdays. Male students play soccer or take walks around town with the boys while female students play the piano or read books with the girls.

The goal is to help them adjust to Korean culture, language and society, so that they can learn and make friends when they attend Korean schools.

“I try to help the children of multicultural families adapt to the unfamiliar culture of Korea without hardships,” said Jin Dong-min, founder of Jaeneung-nanoomi, who is a freshman at the Gyeonggi Foreign Language High School. “In the end, these children are no different from us in that they will lead Korean society in the near future.”

Choi Yeon-mi, 11, whose mother is Chinese but of Korean descent, said a female student from Jaeneung-nanoomi “taught me how to play the piano and how to make a paper bird.” 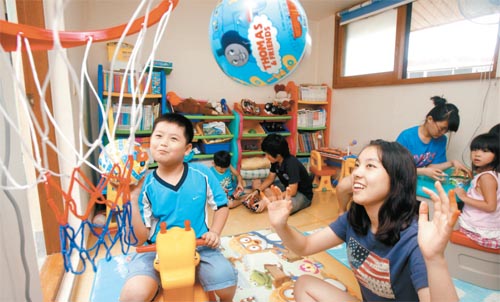 A Jaeneung-nanoomi member plays mini-basketball with a boy from a multicultural family at the Gimpo Multicultural Family Support Center. By Jeon Min-kyu


Born in China, Choi moved to Korea several months ago. To better adapt to Korean society, Choi did not immediately go to elementary school but instead was sent to the support center, where she received advice from Jaeneung-nanoomi on how to interact with Korean students.

The Gimpo Multicultural Family Support Center also has programs for parents. While programs for children rely heavily on community service groups such as Jaeneung-nanoomi, programs for adults,­­ which include classes on the Korean language, computers and cooking, are provided by professionals, including professors from Korea University and IT employees at Korea Telecom.

“The center was originally a community service program within our church,” said Director Lee Jeong-mi, founder of the Gimpo Multicultural Family Support Center. “We started out by helping the families take care of immigration documents and providing them with clothes. Then several families suggested opening a center for the things we do, and it sounded like a great idea.

“Now we provide further help such as tutoring and baby-sitting to families and their children. Our ultimate goal is to expand the center nationwide so that every multicultural household can be taken care of if necessary by a local center,” Lee said.

Hopes - and needs - are high for the multicultural families, and experts say these centers and organizations provide them with valuable assistance in understanding Korean society.

However, mothers of these multicultural families, who are foreigners trying to adapt to Korean society as adults, feel there is more to be done. Kumiko Takatani, a Japanese woman married to a Korean man, sends her two sons to the Gimpo Multicultural Family Support Center for extracurricular activities. Her first son, a first grader, frequently spends time with the Jaeneung-nanoomi members.

“When I first came to Korea 11 years ago, I had a tough time learning Korean,” Takatani said “I couldn’t find any Korean language programs for foreigners like me in my neighborhood, so I had to learn the language all by myself. When my first son was born, I wasn’t quite ready to converse with him in Korean.”

The problems are not limited to education. Often, multicultural mothers struggle economically as well.

“It is difficult for foreign mothers to find decent jobs because the Korean government does not recognize licenses from countries outside of Korea,” complained Takatani, who was a nurse in her native Japan.

Director Lee believes that now is the time for the Korean government to make a profound and lasting impact on the lives of multicultural families.