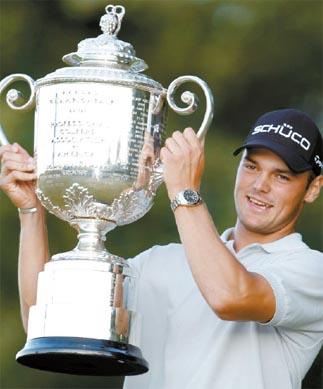 With American Dustin Johnson having earlier been eliminated from the playoff in stunning fashion after being handed a two-stroke penalty, Kaymer went on to clinch the prized Wanamaker Trophy over three extra holes at Whistling Straits.

“I cannot win anything bigger,” the beaming 25-year-old told reporters after becoming only the second German to land a major title. His compatriot Bernhard Langer clinched the U.S. Masters in 1985 and 1993.

“The majors, they are the biggest tournaments we play. It's cool to see my name [on the trophy] next to Jack Nicklaus, Arnold Palmer and all those guys. It will take me a while to realize what has happened.”

Kaymer's victory made him the sixth first-time winner in the last seven majors with Phil Mickelson's emotional victory at the U.S. Masters in April the sole exception. Watson holed a 3-foot birdie putt at the first playoff hole, the par-four 10th, but Kaymer immediately responded by sinking a 15-footer to birdie the 223-yard 17th.

The German then sealed victory in the year's final major with a bogey at the par-four 18th after both players found the right rough off the tee. The long-hitting Watson struck his second shot into a creek guarding the front of the green on the way to a double-bogey six. Kaymer laid up with his second shot and struck his third to 15 feet before two-putting for the title.

After tapping in from less than 2 feet, the Dusseldorf native removed his cap to acknowledge the roars from the crowd crammed around the green before shaking hands with Watson.

"I just hope with this win, I can make golf more popular in Germany," Kaymer said after earning a check for $1.35 million.

Watson's disappointment at finishing second was swiftly erased when he learned he had qualified for the U.S. Ryder Cup team for the first time.

Johnson had finished level with Kaymer and Watson after the 72 regulation holes on 11-under-par 277 but was adjudged by officials to have grounded his club in a bunker to the right of the fairway before playing his second shot at the 18th.

"Walking up there and seeing the shot, it never once crossed my mind I was in a sand trap," a stunned Johnson said. "I just thought I was on a piece of dirt that had been trampled down."

Johnson had birdied 16 and 17 to lead the tournament by one shot playing the last but he missed an eight-foot par putt to bogey the hole for a one-under 71, which was then adjusted to a 73.

That dropped him into a tie for fifth at nine under with compatriot Jason Dufner (71) and Australian Steve Elkington, who also closed with a 71 in his bid to win a first major title since the 1995 PGA Championship.

Kaymer, who sank a 15-foot par putt at the last for a 70, and Watson, after firing a 68, went into the playoff with each of them seeking a maiden major victory.

Britain's Rory McIlroy, at 21 aiming to become the youngest major winner in 80 years, signed off with a 72 to share third place at 10 under with American Zach Johnson (70). Six players held at least a share of the lead during the final round and six were still in the title hunt with three holes remaining before the championship went into a playoff.

It was a day to forget, though, for American Nick Watney who led by three strokes overnight but double-bogeyed the first and tripled-bogeyed the seventh on the way to a nightmare 81 and a tie for 18th at four under.

Phil Mickelson, winner of the 2005 PGA Championship, fired a best-of-the-day 67 to share 12th place at six under, four better than Tiger Woods, who struggled on the way to a 73.