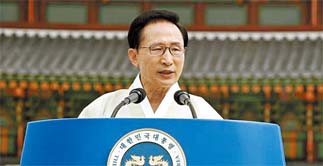 President Lee Myung-bak proposed a unification tax yesterday, stressing a long-term approach for what he said is an inevitable event.

Lee’s remarks came in the midst of high tension on the Korean Peninsula since the deadly Cheonan sinking.

In an address marking the 65th anniversary of Liberation Day, when Korea was freed from Japanese colonial rule before being divided into two, Lee stressed that the current state of division between the Koreas should be overcome.

“Reunification will happen,” Lee said. “It is therefore our duty to start thinking about real and substantive ways to prepare for reunification, such as the adoption of a unification tax.”

People walk through the restored palace gate of Gwanghwamun yesterday in central Seoul after they attended a ceremony to celebrate Korea’s Liberation Day from Japanese colonial rule in 1945 and to mark the opening of the main gate of Gyeongbok Palace. [NEWSIS]

As a follow-up measure to the unification tax proposal, Blue House officials said the government will study ways of establishing such a tax, taking into account public opinion.

According to international research, it would take $1.7 trillion to raise the income level of North Koreans to that of South Koreans. Experts say the unification tax proposal would pave the way for planning discussions, with the eventual hope of drafting future government policies that reflect unification costs.

Some ruling Grand National Party lawmakers, including floor leader Kim Moo-sung, welcomed the proposal, saying it was timely in preparation for the “era of unification.”

But some other GNP lawmakers said the government should have showed prudence and considered a response from the North and the public in the South.

The opposition parties said the suggestion came “out of the blue.”

“Some pending issues, such as the four rivers restoration project, should be discussed first,” said Park Jie-won, the Democratic Party floor leader.

In his address, Lee also proposed a three-stage unification formula, saying the two Koreas can proceed with the goal of unification by achieving a peaceful community, an economic community and then a community of the Korean nation.

“Today, inter-Korean relations demand a new paradigm,” Lee said. “The two Koreas first need to form a peace community... What is most important in this connection is the denuclearization of the peninsula.”

The emphasis on denuclearization, analysts say, is in line with Lee’s existing stance toward North Korea.

Lee has been less engaging toward North Korea than his two progressive predecessors, Presidents Kim Dae-jung and Roh Moo-hyun.

Lee’s approach to North Korea is considered to be similar to that of President Kim Young-sam in the early 1990s, who also followed a three-stage unification formula.

But Blue House officials said Lee’s formula is different because Lee sees peace achieved only through denuclearization as a pre-condition to economic cooperation.

The address, made 10 days before the beginning of the second half of Lee’s five-year presidential term, is also a self-evaluation of the first half-term and gives a glimpse of the goals he would pursue for the second half.

Lee said future policy discussions could focus on a constitutional amendment that would shift some presidential powers to the prime minister, as well as reforms in the electoral system and the reorganization of administrative districts.

“If necessary, a revision of the Constitution could be discussed at the National Assembly,” Lee said.