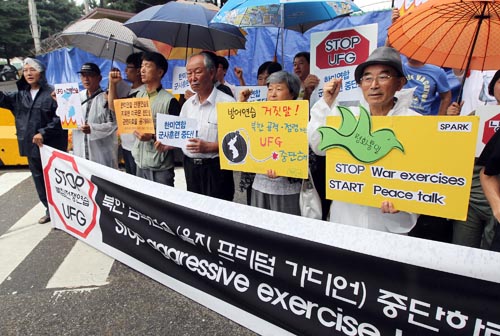 
Tens of thousands of South Korean and U.S. troops launched a fresh round of military drills yesterday despite North Korea’s warning that it would retaliate with a “merciless counterblow’’ for the exercises Pyongyang considers a rehearsal for invasion.

They follow massive joint naval drills last month off South Korea’s east coast that Washington and Seoul said were a show of unity following the deadly sinking of a South Korean warship in March. The allies blame North Korea for the torpedo attack that killed 46 sailors. Pyongyang denies involvement.

Pyongyang - which vowed harsh retaliation for those drills as well - has for years threatened the South with destruction, though it has never followed through with an all-out military assault since the Korean War ended in 1953.

The U.S. stations about 28,500 troops in South Korea and tens of thousands more in the region. Seoul and Washington say the routine military drills are purely defensive, while North Korea calls them preparation for an attack.

“It is another grave military provocation aimed at ... igniting a nuclear war [against North Korea],’’ Pyongyang’s main Rodong Sinmun newspaper said in a commentary carried yesterday by the official Korean Central News Agency.

The country’s military threatened Sunday to deal a “merciless counterblow’’ to the U.S. and South Korea, “the severest punishment anyone has ever met in the world.’’

The North’s military did not elaborate on how it would retaliate. South Korea’s Defense Ministry said yesterday that it was keeping a close watch on North Korea and had spotted no suspicious activity.

Earlier this month, South Korea also carried out its own naval drills near the tense western Korean sea border where the Cheonan warship went down, drawing a barrage of artillery rounds from North Korea.

The Ulchi Freedom exercises are designed to improve the allies’ joint capability to defend the South and respond to any potential provocations, the U.S. military said in a statement last month.

“We can prevent a war and maintain peace when we get thoroughly prepared,’’ President Lee Myung-bak said at a cabinet meeting yesterday.