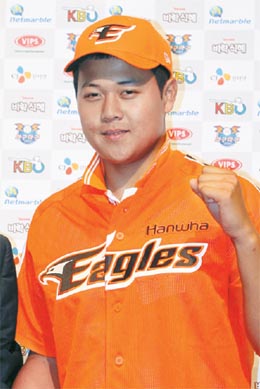 Yoo Chang-sik was selected first overall in the 2010 KBO Amateur Draft by the Hanhwa Eagles but was not just a hot commodity among domestic professional baseball clubs.

Several Major League Baseball teams sought the services of the 18-year-old southpaw pitcher, but all were turned down because Yoo is focused on making a name for himself in the KBO before attempting a move to the MLB.

Yoo said after the draft that the thought of relocating to the United States seemed “tiresome.”

The Gwanju Jaeil High School senior was approached by several MLB clubs but is said to have turned down the offers in large part to take care of his single mother in Korea.

It is Yoo’s intention to try his luck in the MLB after establishing himself as a great player in the KBO.

Hanhwa’s selection of Yoo as its top pick came as no surprise because the lefty was the most dominating pitcher at the high school level in Korea. Yoo, who had remained stoic throughout the draft, cracked a smile at his mother Choi Sook-ja, 41, after completing his interview with media outlets following the draft.

“This is merely the start,” Choi told her son as a way to encourage him.

Earlier this year, Yoo announced he would not take any offers from abroad and would remain in Korea to take care of his mother.

Regardless, Yoo was bombarded with questions about his decision and whether he did not regret passing up lucrative offers from the New York Yankees, New York Mets and Chicago Cubs.

“I was guaranteed a $1 million signing bonus but I turned them all down,” Yoo said. “I want to make a name for myself in Korea. It won’t be late to gain recognition in Korea first before attempting a move to the MLB.”

In being selected by Hanhwa, Yoo will be paired with another southpaw hurler, Ryu Hyun-jin, who is widely considered one of the best, if not the best, starting pitcher in the KBO.

Yoo is already being tapped as the second coming of Ryu.

At the Golden Lion Flag High School National Baseball Championship - one of the four major national high school tourneys in Korea - Yoo tossed 30 innings without giving up a single run en route to a 3-1 record. In addition, Yoo topped all pitchers with 31 strikeouts at the IBAF World Junior Baseball Championship.

Yoo possesses a fastball that clocks in between 90 and 92 mph, as well as a slider and change-up among other pitches, which will enable him to produce immediately at the next level.

“I want to try and post better records than Sun Dong-ryeol and Ryu Hyun-jin,” Yoo said. “It’s an honor to be able to pitch with a pitcher like Ryu starting next season. I’m also looking forward to facing batters like Lee Dae-ho and Kim Hyun-soo.”