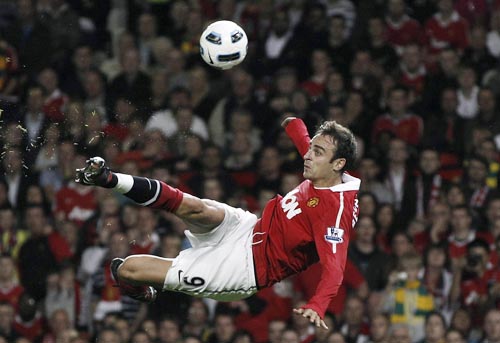 
LONDON - Striker Dimitar Berbatov scored a clinical first goal as Manchester United sauntered to a 3-0 victory against promoted Newcastle United in their Premier League opener at Old Trafford on Monday.

Darren Fletcher and Ryan Giggs also struck to provide an emphatic response to champions Chelsea’s 6-0 blast against West Bromwich Albion on Saturday, with Alex Ferguson’s slick side a class above Newcastle, which faded away after a bright start.

Paul Scholes was chief tormentor, the veteran playmaker releasing Berbatov after 33 minutes to fire a low shot past Steve Harper and then picking out substitute Giggs to volley United’s third goal late in the second half.

Fletcher’s close-range poke home had effectively ended the match as a contest shortly before halftime and United, runners-up to Chelsea last season, spent the second period toying with their overawed opponents.

It was a satisfying night for Ferguson, who gave Mexican striker Javier Hernandez his league debut as a second-half replacement for Wayne Rooney, but he reserved his praise for the effervescent Scholes, who at 35 still pulls United’s strings.

“He showed again that he has a marvelous passing range and vision for the game and he’s still got that appetite for the game and that’s the most important thing,” Ferguson told Sky Sports. “When players retain that, like him and Giggs, they are blessed with something special.

“He has looked after himself. Last season was his first full season without injury for a long time. If he can stay fit that’s the key for him.”

Ferguson also described Berbatov’s display as “excellent” although he felt the languid Bulgarian center forward should have scored three or four goals.

It took United half an hour to make their superiority count although Newcastle, back in the top flight after just one season, should have gone ahead when burly striker Andy Carroll headed wastefully wide from Joey Barton’s corner.

That was the closest they came to giving their fans something to cheer about.

Scholes finally unpicked the visitors’ defense, rolling a pass invitingly into the path of Berbatov, who made no mistake with a low angled drive into the far corner of the net.

Fletcher deflated Newcastle completely in the 41st, swiveling to hook a close-range volley past Harper after Patrice Evra’s cross was helped on by Rooney.

Berbatov should have scored again after the break, stabbing wide after a blur of intricate one-touch passes had left Newcastle’s defense transfixed. The tall striker then made a hash of an attempted volley and was denied again late on by Harper before Scholes combined superbly with Giggs, who guided his volley inside the far post.

“We controlled most of the match,” Ferguson said. “The passing was good at times. It was a steady performance.”

Park Ji-sung did not earn any playing time in the season opener.