Huh expected back in K-League

Huh expected back in K-League 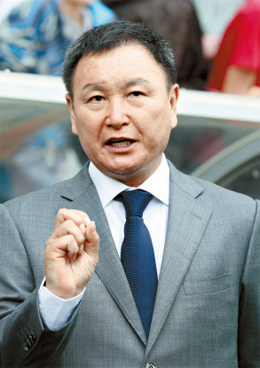 Former national football team manager Huh Jung-moo is set to announce his return to the K-League by the end of this week, with Incheon United reportedly reaching an agreement with Huh.

Kim Bong-kil has been the team’s interim manager after Ilija Petkovic stepped down in order to return to Serbia to take care of his ailing wife.

“All that remains at the moment are the minor details of the contract,” said a person with inside knowledge of the situation. “The club is expected to make the announcement over the weekend and hold a press conference early next week.”

“I’m thankful that Incheon United has shown interest,” said Huh in a phone interview with Ilgan Sports. “I will think things out thoroughly before making a final decision.”

Huh is coming off a successful stint with the national team and broke several records during his latest two-and-a-half year stint with the Taegeuk Warriors. The biggest accomplishment by far was assembling a group of young and talented players - who were dubbed the best Korean national team to date - and taking them to the round of 16 for the first time on foreign soil.

Placing emphasis on having fun instead of obsessing over results, Huh was successful in replacing veteran players from the 2002 World Cup squad with young talent such as Lee Chung-yong, Ki Sung-yueng and Lee Seung-yeol.

Incheon United poses a challenge for Huh. The club started out well this season but slipped to ninth place in the 15-team K-League with a record of six wins, one tie and nine losses. Since losing Petkovic, Incheon United has been on a four game losing streak.

But the Incheon squad, featuring the current K-League lead goal-scorer Yoo Byung-soo, 22, has the talent and potential to make the postseason under proper direction and tutelage. The team’s defense and attack routes, which can better enable Yoo to create chances up front, will be the most pressing issues for Huh if he takes over the reigns.

Aside from the challenge of taking over a team that has slipped to the middle of the league standings, Huh is well-connected with those involved with the team.

“It’s highly likely that Huh’s friendship with Song Young-gil, the mayor of Incheon, and Kim Bong-kil, the interim manager, played a big role in Huh’s decision to sign with the club,” said an acquaintance of Huh who wished to remain anonymous.

It was Song who invited Huh to the friendly match between Incheon United and AS Monaco on July 11. Kim served as an assistant with Huh during Huh’s stint as manager of the Chunnam Dragons between 2005 and 2007. The perks of managing in the third most populated city with a team that plays in one of the 2002 World Cup venues - the 50,256-seat Incheon Munhak Stadium - seems to also have figured into Huh’s decision.

Huh has also said that he wants to play a role in developing Korean football at the grassroots level. A football academy under the name of 2002 World Cup manager Guus Hiddink is being built in Incheon with a completion date set for late next year. The center is being built with the cooperation of Incheon city and Incheon United and will look to nurture young players as well as coaches and referees. Having directed the Yongin Football Center from 2001 to 2004, Huh is expected to play a significant role with the new center being built. Huh held discussions with Hiddink prior to the start of the 2010 World Cup on the matter.