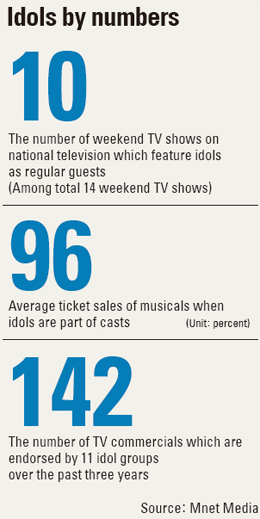 Love them or hate them, idols today are the kings and queens of Korean entertainment, dominating not just the music world but, increasingly, television and film as well.

According to an analysis by the JoongAng Ilbo and Mnet Media, an entertainment company based in Seoul, these cutesy bubblegum divas exert an enormous influence on Korea’s entertainment industry.

The analysis followed the daily schedules of 11 major idol groups and concluded that variety TV programs (called yeneung in Korean) function as incubators, cueing the Korean public to the next big thing. On yeneung programs, idols show off their nonmusical charms, dancing or doing impressions.

Kim Eun-a, head of the public relations team at SM Entertainment, which manages the idol group f(X), explained, “Since each member has many different schedule obligations, it is hard to gather them together in one spot.” Like other idol groups, the five members of f(X) often host music shows or appear on reality programs.

The 11 idol groups tracked included Super Junior, Girls’ Generation, Big Bang, 2PM and 2AM, which were the most popular on Mnet’s charts between February and May.

Among them, nine groups appeared on yeneung programs at least once before they topped the charts. Many are also regulars on primetime programs. For example, singer Jo Kwon is currently a regular guest on four TV programs as of this month, but his group 2AM was not very successful when it debuted in July 2008. As Jo started to appear on TV, however, doing flamboyant dance moves and offering exaggerated reactions, 2AM’s popularity began to flare.

After debuting on television on Nov. 9 last year, Jo appeared on “We Got Married,” which pairs up celebrities and provides a glimpse into what their lives might be like if they were married. When Jo joined the cast, 2AM sales sharply rose, and the group finally reached the top of the charts for the first time earlier this year with a song titled, “Can’t Let You Go Even If I Die.”

“Doing these TV shows is one way to promote our songs,” said Jeong Jin-woon, another member of 2AM. Jeong also regularly appears on television as a guest.

Once idol groups reach No. 1 on the charts, the next step is to cash in by appearing in TV commercials. Then many idols expand their careers to fictional dramas, films and musicals.

Theatrical producers are happy to have the idols, because they guarantee high ticket sales. When idols are cast in musicals, an average of 96 percent of seats are filled, compared to 70 percent or lower for typical Seoul productions.

Tickets for the musical “Palace,” which stars U-know Yunho, a member of TVXQ, an idol group which is involved in a legal dispute with its entertainment company, sold out in just two minutes after they went on sale earlier last month.

Dramas and films are idols’ favorite side jobs. T.O.P., a member of Big Bang, appeared in the TV drama “Iris” last year and also landed a role in the film “71: Into the Fire.”

In fact, it would be inaccurate to call most of these idols “singers.” Instead, they are all-around entertainers. It’s become the norm for idols to look forward to success in show business, whether they keep pursuing their singing careers or not. “I think I will start acting in 10 years,” said Sulli, a member of f(X).

Pop music critic Im Zin-mo said, “One thing I can say for sure is that idols are the ones who sustain the nation’s K-pop scene, and they go even beyond that.