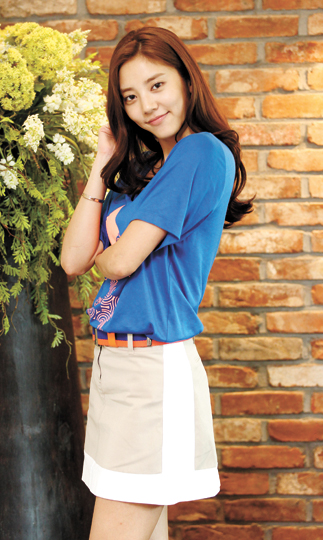 Singer Son Dam-bi returned to the music scene with her new song “The Queen” earlier last month, but her transition from her previous two hit albums to this new mini-album has been rocky. By Kim Min-kyu

In the flood of carefully manufactured idol groups on the nation’s K-pop scene, it takes serious talent for solo singers to get noticed. But Son Dam-bi is one of the lucky few.

After debuting in 2007, her two songs “Crazy” and “Saturday Night” became huge hits, and the 27-year-old singer soared to instant stardom.

With the release of her new mini-album “The Queen” earlier last month, however, she became embroiled in a plagiarism scandal, and the title song received a lukewarm responses from the public. A clip surfaced online of her singing with all mixing effects removed, and her vocals were criticized.

She sat down for an interview on these issues and her plans for her future with Ilgan Sports, an affiliate of the JoongAng Daily.

Q. It’s been a year since you came back to the music scene, but you had to deal with many issues from the moment of your comeback.

A. I was shocked. I thought some people were jealous of me because my two previous songs were loved by so many people. But I soon realized everything happens for a reason, and I think I should accept their criticism.

Some say you need to learn more about singing.

I partly admit that, but they should know each singer has a different vocal range. My voice is pretty low and I think it’s one of my weaknesses as a singer. But I will keep working to improve my vocals.

After I finished the TV drama “Dream” in September last year, I went to the United States and enrolled in the Edge Performing Arts Center located in Los Angeles. I learned how to dance and sing for a while. I heard the center is an institution for professional singers and dancers. I think American pop singers Britney Spears and Justin Timberlake also took classes there.

Let’s move on to your private life. I heard you associate with a few close friends.

It’s true. I think I’m a kind of an introvert. I enjoy my me time. And it’s been only three years since I debuted, so I have a handful of celebrity friends.

What kind of student were you back in your school days?

I didn’t like to receive attention from my classmates. I think I was a good student. I often received the fifth- or sixth-highest grades in my class.

I often find myself attracted to men who have a passion for their work. If I had to pick an actor I’m attracted to, I would choose Hwang Jung-min. I often run across him at a hair salon and he looks very nice.

You spent about four years as a trainee before you debuted. What was it like living as a trainee for such a long time?

Life was hard. My mother gave birth to me when she was 37, which was pretty late. She was old and my father was sick. I’m the only daughter, so I had to take care of my family. But only 100,000 won ($90) was given to trainees every month. I cried a lot around that time.

As a female singer, you always have to look perfect. What’s your secret to keeping in shape?

I think I easily gain weight, so I try to be strict on myself. I work out about two hours every day and I always care about what I eat.

Did you get any plastic surgery?

Just on my eyes.

I want to be recognized by the public as a musician first and want to take on drama acting later. I don’t want to miss out on either career.