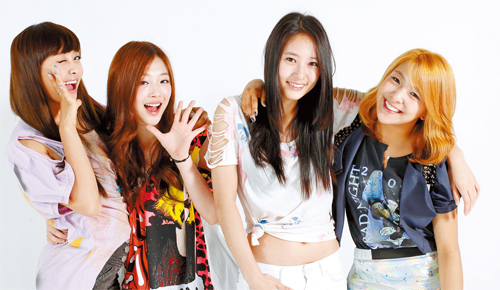 Up-and-coming idol girl group f(X) has two non-Korean members, Victoria, left, and Amber, not pictured. The other members, left to right, are Sulli, Krystal and Luna. By Oh Sang-min

A closer look, however, reveals that Victoria’s a little different - she’s actually from Beijing. She has difficulty pronouncing double consonants and sometimes misunderstands interview questions, as she did in a recent interview with the JoongAng Daily.

Asked about her favorite music genre, Victoria said, “I love Lee Hyo-ri.” At that, Luna, another member of f(X), leaned over and whispered in Victoria’s ear and said, “She wants to know your favorite music, not musician.”

The role of interpreter is familiar to f(X) members Luna, Krystal and Sulli, who are often called upon to help the two non-Korean members of the group, Victoria and Amber, who is Taiwanese-American and couldn’t attend the interview as she was visiting her parents in the United States.

“They speak good Korean, but we sometimes have to explain in easy and simple words when we do interviews,” said Luna, looking at Victoria with a grin on her face. But in all seriousness, the 17-year-old added, “Since our goal is to become the best dance group in Asia, I believe that diversity helps us achieve that.”

The girl quartet miss A. From left: Jia, Min, Suzy and Fei. Jia and Fei are Chinese and Min is Korean-American. Provided by JYP Entertainment


Since debuting in September last year, f(X) has already topped numerous charts and appeared in many TV commercials. It seems their nationalities do not matter to their Korean fans. On the contrary, having a non-Korean member has become the latest trend as K-pop aims for a bigger share of the Asian music market.

“We think of Asia as one single market,” said Kim Eun-a, head of the public relations team at SM Entertainment.

SM is the biggest entertainment agency in Korea by market value, earning 61.7 billion won ($56.1 million) in sales last year. SM was also the first local entertainment company to introduce an idol training system back in the late 1990s. After picking its trainees, SM spends up to 10 years nurturing a single idol. From vocals to foreign language skills, SM is involved in every part of the process.

Since 2006, the firm has held “global auditions” to find talented young people in Asia and North America. Before those events, some entertainment companies including SM hired Japanese-Koreans or taught Korean singers Japanese or Chinese to help them succeed in those two countries. But the industry has greater ambitions these days. Today, SM holds global auditions in as many as 15 countries including China, Taiwan, Thailand, Malaysia, Japan, Canada and the United States.

Victoria and Amber are products of that system. Putting them on f(X) was a move inspired by the success SM had with Han Geng, a former member of idol group Super Junior. Because of his Chinese background, Han Geng helped Super Junior gain acceptance in China, opening up a whole new fanbase.

“When f(X) advances into China later, we believe Chinese will feel friendly towards f(X) because this group has a Chinese member,” Kim explained.

Of the many other non-Korean idols, perhaps none is more beloved than Nichkhun, a member of 2PM. Born in the United States to Thai parents, Nichkhun has become an A-list star here. His fluency in Korean, English and Thai also helps when his group performs outside Korea. JYP Entertainment, 2PM’s management company and SM’s rival, also holds global auditions.

“We don’t care about nationality because we want to go beyond the Korean music market. This is Park Jin-young’s philosophy,” said Jeong Su-jeong, an official at JYP, referring to the founder and CEO whose initials are used in the company’s name.

Victoria, left, a member of f(X), and Nichkhun, right, of 2PM, appear on a primetime TV show. Victoria is Chinese and Nichkhun is Thai-American. Provided by MBC


Still, without any foreign members, the JYP idol group Wonder Girls broke into the U.S. market with their song “Nobody,” reaching No. 76 on the Billboard charts in October last year. It was the first time a Korean group had made the top 100.

Park has also worked with Hollywood actor and rapper Will Smith, and is currently working on more multicultural idol groups. His most recent product is miss A, a quartet featuring two Chinese, Fei and Jia; a Korean-American, Min; and just one Korean, Suzy. The group made its first appearance earlier last month to an excellent public response.

The last of the big three entertainment companies, YG Entertainment, has lagged behind in recruiting non-Korean idols, but it recently held its first global audition.

“Without much marketing in Asian countries, we saw some of our singers and their songs became big hits due to video sharing Web sites,” said Hwang Min-hee, a YG official. “Korean music gained many international followers with the help of the Internet, and we came to the conclusion that we don’t need to stick to finding talent in Korea.”

Other minor entertainment agencies also bring talents from overseas. Alexander from idol group U-Kiss is the son of a Hong Kong father and a Korean mother.

Professor Lee Dong-yeun at the Korea National University of Arts believes this is a lasting shift in Korean pop culture. “Korea’s idol producing system is most advanced in Asia,” he said. Lee is involved in publishing a book of research into Korea’s unique pop idol culture set to be published in December.

“Entertainment agencies, of course, want to explore new markets, but Korean idol music itself has nothing to do with nationality, meaning anyone can listen to it and enjoy it,” Lee continued.

“In that sense, this trend will open a new chapter in the future of the K-pop music scene.”