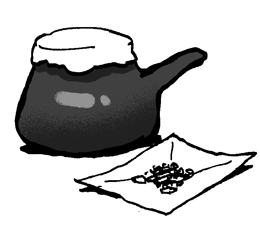 An oriental doctor aims at a vital point on a patient and inserts an acupuncture needle. In that instant, the points where the doctor applied acupuncture are connected in a pyramid, creating a mass of energy. The energy dashes to the affected area with the speed of a laser beam, crashing through the body. As soon as it reaches its target, it shatters in a fiery explosion.

This is a scene from the television drama “Godsend Doctor,” the story of a Goryeo era (918-1392) medical doctor set to broadcast soon. The plot was reportedly influenced by an oriental doctor who participated in the script writing process. The computer graphics dramatize the idea that a disease can be cured by activating key points on a patient’s body through acupuncture.

In Asia, the meridian system has long been the basis of medical science and health care. The oldest medical book in China gives an overall explanation of this system. It is a network of channels through the human body that contain qi energy (gi in Korean), and acupuncturists target parts of these meridians. The problem is that the meridian system isn’t visible like in the drama “Godsend Doctor.” This is why experts in Western medical science, which is based on anatomy, are reluctant to acknowledge the medical effects of acupuncture or the existence of the meridian system.

Of course, a great deal of research has been carried out to prove the validity of the meridian system scientifically. Kim Bong-han, a North Korean medical scientist who conducted his research in the 1960s, was a pioneer in this field. He injected a radioactive isotope into a point on the meridian of a rabbit to see if it followed the route dictated by the meridian system. He followed that experiment with other similar efforts.

According to press reports, oriental doctors are sighing in disappointment nowadays because sales of herbal medicine are low, while competition among oriental doctors has grown intense due to a rapid increase in their numbers - 81 percent in 10 years.

Still, we should keep alive traditional Korean medicine, which has been handed down for thousands of years. To revive Oriental medicine, it is important for the government to help by controlling the supply of Oriental doctors. What is most urgent is, however, restoring the confidence of the people by strengthening the principles and theories of Oriental medicine through more research efforts like the ones undertaken to prove the existence of the meridian system, which forms the basis of Oriental treatments.

We can also develop special fields such as dietary treatments, skin and herbal beauty care products. There is no reason to believe that such excellent doctors as Bian Que and Hua Tuo, who were called the “godsent doctors” during the Warring States Period and under the Han Dynasty in China, cannot be produced even now.