A photo of the aircraft with North Korean markings that crashed in China. The photo was supposedly taken by a resident of the area near the crash and was posted on the Internet. South Korean intelligence officials suspect the plane is a Soviet MiG fighter plane and think the pilot was defecting. Provided by Shiruwang


BEIJING - A North Korean aircraft, probably a MiG jet fighter, crashed in northeastern China Tuesday afternoon, killing the pilot, who may have been attempting to defect to Russia, intelligence officials said.

According to China’s official Xinhua News Agency yesterday, the aircraft went down in the village of Lagu in Fushun County, about 150 kilometers (90 miles) from the border of North Korea. Xinhua quoted anonymous Chinese officials saying the plane might have come from North Korea.

Photos taken by local onlookers that were circulated on the Web showed a logo on the aircraft tail often seen on North Korean military equipment - a red star inside two circles.

“Judging from the photos, the aircraft appears to be a type of Russian-made MiG-15, which was a main North Korean aircraft during the Korean War,” a local military analyst said. “The MiG-15 was retired from North Korea’s main battle force and is being used for training.” 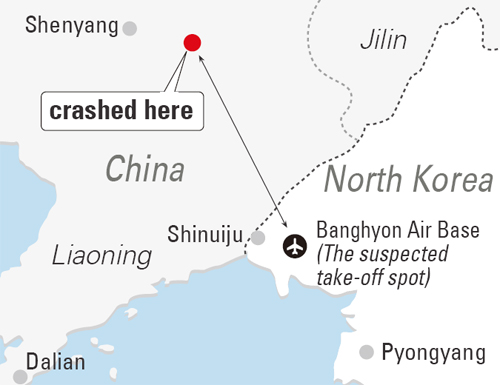 Another analyst said it was a MiG-21, currently North Korea’s main jet fighter. The AP cited residents in the area as saying it was a helicopter.

Chinese media, including Xinhua, reported that Chinese authorities are investigating why the aircraft crossed into China. South Korean intelligence sources said the aircraft’s pilot was initially heading to Russia to defect but got lost. China repatriates undesirable North Koreans.

According to military experts, a North Korean air force base is located about 200 kilometers away from Fushun County. Intelligence officials assume the aircraft broke away from a squadron during a training session. Some said the aircraft may have crashed after running out of fuel.

“In general, North Korean military aircraft go on training sessions with a minimum amount of fuel,” said a military expert. “Given the fact that the damage to the fuselage appears not to be great and the plane landed on its underside, it is presumed that it ran out of fuel.”

Chinese authorities have not disclosed the cause of the crash, but some observers in Seoul raised the possibility that China shot it down as it came over the border.

According to sources, the number of defecting North Korean soldiers is on the rise after a failed currency reform in November 2009 deepened the country’s economic woes. In particular, soldiers belonging to patrol units that monitor the border with China near the Tumen and Yalu Rivers are defecting in substantial numbers, they said.

Four North Korean pilots defected to South Korea with their planes in 1953, 1960, 1983 and 1996. They were rewarded with cash or positions in the South Korean Air Force.