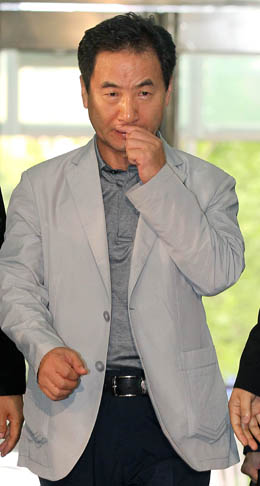 After 58 days as a runaway, the former Yeosu mayor, for whom an arrest warrant has been issued on charges of receiving bribes since June 18, voluntarily turned himself in to police in Seoul yesterday.

Oh Hyun-seop, 60, the former mayor of Yeosu, South Jeolla, was suspected of receiving bribes from subcontractors during his term (2006-2010) in conjunction with preparation for the EXPO 2012 Yeosu Korea. Oh is being questioned by a special investigation team of the National Police Agency in Seodaemun District, Seoul, and was questioned about the bribery charges yesterday.

Oh made a short remark yesterday, saying that “I will elucidate all the suspicions and will offer sincere apologies to Yeosu residents.”

Police said Oh received 260 million won ($221,000) from exterior lighting construction companies hired for the EXPO. One of Oh’s aides, surnamed Kim, possesses 160 million won out of the 250 million won. Another 100 million won was allegedly transferred to another staff member, surnamed Joo, who fled to China, and some parts of the money were distributed to the pubic officials of Yeosu, but details will come out only after Joo returns to Korea by this weekend.

Police suspect Oh gave millions of won to a dozen of Yeosu city council members to buy their support in the June 2 local elections.

Yeosu citizens have been complaining that Oh’s bribery charges and his disappearance marred the image of the city and negatively affect being the host of the international exhibition fair.

Oh served as Yeosu mayor from July 2006 to June 2010 until he was defeated by incumbent Mayor Kim Choong-seok in the June 2 local elections. Yonhap