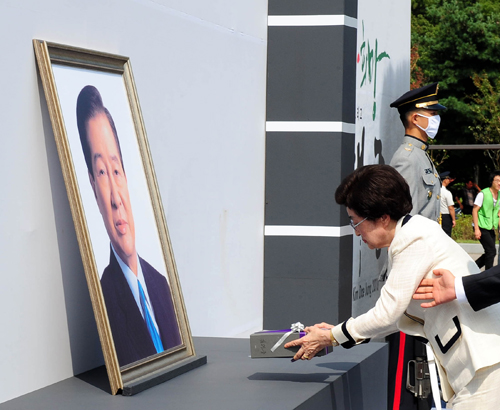 Lee Hee-ho, widow of former President Kim Dae-jung, presents a recently published edition of her husband’s autobiography to his memorial portrait yesterday at a service held in front of the Relics Exhibition House inside Seoul National Cemetery. It has been one year since Kim, who shared the Nobel Peace Prize for his efforts toward reunification of the Korean Peninsula, passed away. About 1,000 public figures and citizens attended the ceremony to pay their respects to the president and his family. Kwon Yang-sook, widow of the late President Roh Moo-hyun, who died a few months before Kim, also attended. [NEWSIS]