A shocking look at the corrosive power of evil

A shocking look at the corrosive power of evil 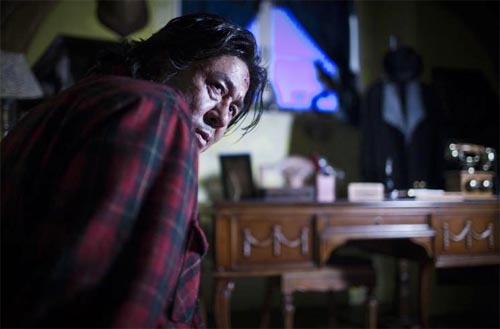 After his fiance is killed by a psychopath, Su-hyun (Lee Byeong-hun) decides to find out and torture the psychopath in extreme ways. Provided by Peppermint and Company


Buy tickets to “I Saw the Devil” directed by Kim Ji-woon, and you’ll step into a cinematic butcher shop.

The hardcore violence tops all previous Korean slasher films and is sure to get “Saw” fans’ blood flowing (unfortunately). In fact, a minute and a half of cannibalism reportedly had to be cut for Korea’s censors to agree to rate the film.

The plot begins in a very conventional way. What sets it apart is the nonstop blood splatter from beginning to finish. Choi even joked at a press conference that viewers should “bring umbrellas.”

The deranged killer uses a metal cane, an axe and a gallstone in his murders, as if squashing insects. He leisurely tunes a guitar in front of a mutilated corpse. As someone once said, humans are scarier than ghosts. The amoral psychopath wandering the streets looking just like anyone else sends a chill down the spine.

Already renowned thanks to his hit “The Good, the Bad, and the Weird,” director Kim has now forever made his mark on the Korean slasher genre. Answering questions about the amount of blood in his film, Kim said: “The movie only reflects current society.”

Just last week, there were two murders, one in Chungnyangni near Seoul and one in South Gyeongsang, and the news of serials killers on the run has driven Korean civilians into panic.

The gore is indeed overwhelming, but unlike in the “Saw” films, it is not purely pornographic. At first, we cheer Su-hyun’s quest for revenge, but it quickly becomes clear that he has no intention of stopping, even at an eye for an eye. The cycle of bloodletting repeats itself, having lost its purpose.

The attentive, loving look on Lee Byeong-hun’s face as he sings to his fiancee at the beginning of the film is transformed into a blank stare, filled with cold, unquenchable hatred. In taking his righteous cause too far, he loses his humanity and becomes brutalized. The message, it seems, is that evil can turn any of us into a devil if we let it.

So, “I Saw the Devil” is better compared to “Oldboy” or “Battle Royale” - films in which extreme violence is used in the service of an idea that proves just as disturbing, if not more so, than the blood itself.

It is a well made film that features excellent performances from Choi Min-sik and Lee Byeong-hun. Choi’s frightening treatment of irreversible madness is incomparable, and Lee puts his action movie skills honed in “G.I. Joe” to good enough use.

Still, the movie’s unflinching realism - particularly its treatment of rape and violence against women - troubled me deeply.

Perhaps Kim’s message is that I should be happy that it still could.

I Saw the Devil