Perfect time for a summer hike: at night

Perfect time for a summer hike: at night 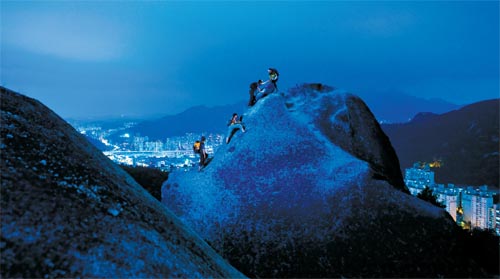 Climbers on the K2 Extreme Team climb a rock near the peak of Mount An in Seodaemun District, with the Seoul cityscape in the background. By Kwon Hyuk-jae


Hiking up Seoul’s many mountains has always been a popular pastime here, but lately an unconventional twist on these treks has been catching on. Though traditionally hikers start out early in the day to avoid a descent after sunset, some are now deliberately seeking to be out at night.

Jung Sang-moon, a 36-year-old office worker, has now stopped going to the nearest bar with his coworkers every Friday night. Instead they head up a nearby mountain.

“If we climb for an hour or two, we get a spectacular panoramic view of Seoul’s nightscape,” Jung said. “It’s comforting in a way to cap off the week with a nighttime climb instead of going out drinking.”

A nighttime trek has many charms, among them peace and quiet, the gentle moonlight and stargazing. The mountains near the core of the city are easier to scale even without moonlight due to the bright ambient light from surrounding areas.

Of course, it’s also the perfect way to escape those broiling summer days. Unpredictable changes in temperature during the spring, autumn and winter make nighttime hiking too dangerous. Hikers may even risk hypothermia if they venture out when the weather’s not right. But to Jung and his ilk, that’s all the more reason to enjoy their pastime while they can.

Hiking after dark is not a new phenomenon. Unmun Temple in Cheongdo, North Gyeongsang is famous for its Buddhist walks, which take place before the break of dawn. The monks of Unmun start out from their housing quarters at 3 a.m. and hike along trails in the large compound before making their way toward the main building or sanctuary of the temple. The hundreds of monks that make their way around the mountains in the early morning darkness have described it as an enlightening experience in and of itself.

Professional mountain climbers that regularly scale peaks 8,000 meters (26,247 feet) or more above sea level are also accustomed to climbing in the silence of darkness. On the day of the big climb, they always start around midnight. The four to five hours just before the break of dawn are reportedly the most ideal for climbing, because it’s the time of the day when the wind subsides and the stars brightly dot the dark skies. Those who have scaled the “eight-thousanders” often say they find solace in these wee hours, when they’re able to feel free from all their burdens.

Of course, hiking at night does pose additional risks.

“It’s ideal to avoid mountains with the character ‘ak’ or tall peaks,” explained Park Seung-ki, 55, an instructor at the Kolon Alpine School.

The Chinese character pronounced “ak” in Korean means “mountain peak,” and appears in the names of several mountains around Seoul with rocky trails known to grow slippery in damp air. Though some do head up Mount Gwanak in the dark, Park said, it’s more sensible to seek out mountains with dirt trails such as Mount Cheonggye, Mount Geomdan or Namhansan Fortress. Park also said that the body tenses up more than usual when hiking in the dark. Experts suggest always taking the safest possible route even if that means taking a detour, keeping the tempo of the climb steady and slow and packing plenty of water and emergency food rations.


My journey up Mount Ungil

The ideal places for hikes around Seoul after dark are easily accessible by public transportation, don’t have very high peaks and offer brilliant nighttime panoramas. A climbing instructor for more than 20 years, Park’s favorite is Mount Ungil in Namyang, Gyeonggi.

This small landmass above the Bukhan and Namhan rivers is located approximately an hour from Yongsan Station on the Jungang subway line, at Ungilsan Station. With the peak topping out at 610 meters, its dirt trails offer climbers a moderate climb. Though it was not a particularly popular mountain in the past, the number of climbers flocking to the mountain has increased noticeably since the subway station opened nearby.

Roughly an hour walk from Ungilsan Station, about 400 meters above sea level, is Sujong Temple. We arrived at the temple at 7:30 p.m. and decided to wait there until sunset. It’s an ideal resting point for nighttime hikers, and many gather there before trekking to the peak. Smaller groups tend to join together there to form bigger groups, simply for safety’s sake.

The story of how the temple got its name goes back to King Sejong the Great (1397-1450), the sage king who commissioned the modern Korean alphabet. On his way back from Mount Kumgang, King Sejong is said to have discovered a natural spring (su) and a bell (jong) in the area.

The temple is also famous for its view of Bukhan River and a 500-year-old ginkgo tree. A traditional teahouse with a window facing the Han River provides visitors with a resting place (regrettably, it’s only open from 11:30 a.m. to 4:30 p.m.). Those looking to venture up the trails of Mount Ungil after sunset have to settle for taking in the view of Bukhan River from the garden located next to the teahouse.

Due to less than favorable weather conditions, there weren’t a lot of climbers the day we took to the trails with Park earlier this month.

The top of Mount Ungil is approximately 200 meters up from the teahouse. We turned on our head lanterns and grasped our climbing sticks. (Due to low visibility and rocks along the trails, climbing sticks are a must when hiking at night.)

“Remember to keep the path ahead of you well lit by keeping the head lantern light close by,” Park said. “Also, it’s always good to lead with your legs first instead of forging ahead with both your body and leading leg.”

We also stuck glow sticks to our backpacks. The fluorescent green lights worked to guide those following behind. Because it had rained earlier in the day, the trail was thick with nighttime fog. Part of the charm of climbing at night is the coolness in the air, but thanks to the afternoon showers, Mount Ungil’s trails were still hot and humid. We were sweating profusely as we made our way to the top. I even stopped to change into a pair of shorts I had packed in my knapsack.

After about an hour on the trail, we reached the ridge of the mountain. The peak was roughly 10 minutes away. At last, we found some cool air.

Mount Ungil connects to Mount Jeokgap and Mount Yaebong to the west. Once we reached the peak, visibility to the northwest was clear, but unfortunately the Bukhan River and the Han River below, as well as Mount Jeokgap - which we were told was about two hours’ hike from Mount Ungil - seemed quite a distance away in the thick fog.

We reached the peak at 9 p.m., and considering the last train back to Seoul was at around 11:40 p.m., we had about an hour to savor our time at the top. We sat and enjoyed the cool breeze in the dark with our head lanterns turned off.

Our descent from the peak of Mount Ungil proved more difficult than the climb itself. The fog seemed thicker than during our climb up, and the LED head lamps seemed to reflect off the thick fog, making our visibility even worse. In such situations, it’s better to bring battery-powered handheld flash lights. It just goes to show, there’s always another lesson to learn on the mountain.

Basic safety measures for hiking in the dark are not much different from those for regular hiking. A hiking stick, gloves and head lamp are essential. Hikers should refrain from wearing running shoes or sneakers because trails are more slippery during night. It’s also good to pack glow sticks, which are sold at any hiking supply store.

Using a hiking stick, it’s best to shift your center of gravity a bit to the rear when climbing. There is a higher risk of stumbling over rocks and branches at nighttime. If you do stumble and you have one leg stretched out well ahead of the body, you can buy some time to react and save yourself from a bad fall.

When hiking, it’s good to eat a lot of food in small portions. Pack rations high in carbohydrates and sugar.

Hikers also need to replenish their bodies with water more often during night hikes. Your heart rate speeds up in the dark, and this in turn increases the need to hydrate. But remember not to drink too quickly, or it will become difficult to get rid of thirsty feelings throughout the hike.