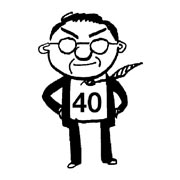 In the chapter of about governance in Confucius’ “Analects,” the philosopher said: “A wise man knows his own mind at the age of 40.”

But for ordinary people, being 40 is full of temptations. His teaching can be interpreted as an aphorism advising we “be discreet because you can be lured by many temptations.” It was in the same context that President Abraham Lincoln said that a man should hold himself responsible for his face when he is over the age of 40.

It sounds reasonable, as 40 is the halfway point, potentially a turning point in one’s life. The average Korean life span is 80.1 years. Most businessmen who achieved big business success and changed the course of their lives, did so when they were in their 40s. Jean-Jacques Rousseau also said that in their teens, humans are lured by candy; in their 20s, by lovers; in their 30s, by pleasure; in their 40s, by ambition; and in their 50s, by greed. Certainly, ambition is the driving force for success.

In history, too, 40 was the halfway point for many important figures. Mohammed, the founder of Islam, received his first revelation from Allah at that age, leading to the birth of the third Abrahamic religion after Judaism and Catholicism. It was also at around the age of 40 that Sima Qian, the master Chinese historian who wrote the “Shiji,” was ordered to be castrated. If it were not for the anger he felt against this punishment, he might not have had the energy to write the most important history of China. Napoleon Bonaparte was 40 when he met Goethe, who was taking refuge from war. Having read “The Sorrows of Young Werther” seven times, Napoleon felt he was speaking to a human being who alone was bigger than an empire. The incident could be said to mark the halfway point of modern history.

It was also at the age of 40 that Jeong Yak-yong, the author of the most extensive collection of books written in Chinese throughout Korea, China and Japan, was exiled to Gangjin, Jeolla. In the 18 years afterward, he wrote many essential books on Confucian realism, such as “Mongminsimseo.” It was also at this age that Jeong Cheol, a leading Confucian scholar in the Joseon Dynasty, decided to retire from public life and return to his hometown.

Any presidential candidate of the Republic of Korea must also be over the age of 40 on the day of election to be eligible.

However, Korean men in their forties are the most miserable group in Korea, according to a survey by the Korean Psychology Association. Ironically, the happiest group in Korea is women in their 40s. While men suffer from hot competition and various temptations, women are said to enjoy freedom from household chores and child care. If that’s the case, I think Korean men should take pride in themselves as they accept their own misfortune for the sake of the happiness of their better halves. And that, in the name of love!