Where did national seal’s gold go?

Where did national seal’s gold go? 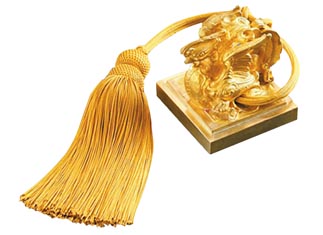 The newest great seal of Korea

The great seal of Korea, a ceremonial symbol of the country, is now the subject of controversy after suspicion emerged that some of the gold used to make it was pocketed by the chief seal manager.

The great seal, which is phoenix-shaped and 9.9 centimeters long in height and width, was created in 2007 after the previous seal developed cracks on its surface. It is used when the president approves important state affairs, such as a change in the Constitution or national awards.

Accusations were first made by insiders at the great-seal manufacturing team at the Ministry of Public Administration and Security, who said that team chief Min Hong-gyu took some of the leftover gold and crafted smaller seals to give as gifts to high-profile politicians. Min strongly denies the charge.

The Ministry of Public Administration and Security, which was in charge of manufacturing and managing the seal, said yesterday that it is planning to request a police investigation.

“We hired a lawyer and are in the process of drafting a letter of complaint,” said an official at the ministry. “Who we accuse - whether it’s a particular person or the whole great-seal manufacturing team - we will further discuss with the lawyer.”

According to the ministry and the seal manufacturing team, the government purchased three kilograms (6.61 pounds) of pure gold for 90 million won ($76,694) to make the new seal. Of that, 2.053 kilograms were confirmed to have been used, but the whereabouts of the remaining 947 grams are unknown.

Some members of the team - including Lee Chang-su, who was in charge of casting the seal - said they delivered the remaining gold to Min.

Lee and some other members claim that Min asked them to make the gold into smaller versions of the seal measuring 1.5 square centimeters. They said Min gave them to politicians.

“We made at least 35 gold seals at the request of Min,” Lee told Yonhap News Agency. “Min provided 14 of them to political figures and sold some of them to the general public.”

“We ran short of gold, so I put 2 kilograms of my own gold into making the seal,” ministry officials quoted Min as saying.