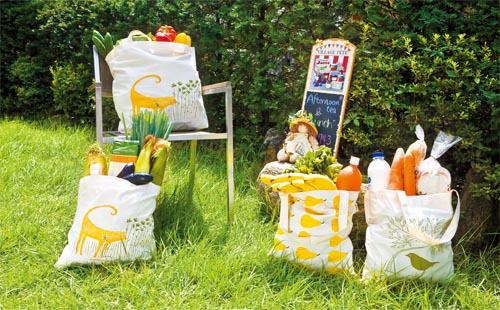 “Green growth” has been a crucial theme of Korean politics lately. The goal is development while preserving the earth’s natural environment. But on a personal level, environmental organizations accentuate the need to practice “green habits” in everyday life. While phrases such as “save the earth” and “ecology campaign” sound extravagant, green habits are actually simple and easy to put into practice. Four housewives who acquired green habits enthusiastically back this up with their respective accounts. Though at first, incorporating green habits into one’s daily life can cause inconveniences, you soon get used to it, they agreed.

The article was written with the help of Shin Geun-jeong, director of Green Korea United.

Eating dishes cooked with fresh ingredients in season was the first step for Kim Ji-hyang, 39, of Seongnam, Gyeonggi. Kim’s interest in nutrition was driven by the birth of her first child, and soon she realized that local food was better for the environment because it uses less energy to transport. So she began to buy directly from the Eco Association (www.ecocoop.or.kr), Hansalim (www.hansalim.or.kr) and regional organic food sellers over the internet. Coops use less packaging than supermarkets, and Kim bought in-season food to save on storage costs.

She uses seasonings made at home, one from dried anchovies, mussels and shiitake mushrooms ground in a blender and stored in a bottle. At first, her family rebelled against her healthy and green eating project. Long accustomed to the taste of MSG, her husband complained that her stews were bland, while her young son asked for hamburgers and sausages. But in time, both came to appreciate her meals, as her son accompanied her during grocery shopping trips and learned how to grow herbs on the apartment balcony. Now he’s a big fan of homemade hamburgers, and her husband has relented.

Green habits: Eating seasonal, locally grown food (mostly vegetables and grains) and decreasing the amount of instant food bought. This cuts the amount of energy used in processing and transportation.

Lee Mi-jeong, 41, of Yongin, Gyeonggi, has been working to decrease the amount of energy her appliances use when she isn’t using them.

Often, even after one pushes the power button on electronics, they’re not really “off.” Many still draw power, especially those that have a “sleep” mode.

To stop this waste of electricity, Lee unplugs her electronic appliances that are not being used. She started by writing a list of all the appliances in her home. Then, whenever the family was out or simply not using them, she would go through the house and unplug them all. Her husband found this tiresome at first and they argued when the drier wouldn’t work on a busy morning, the computer wouldn’t turn on at night or the cell phones would go uncharged. Though her husband is now used to plugging in devices, unplugging them afterward remains a challenge.

Lee even got rid of unnecessary lights. “The living room and front door is connected so we don’t need lights at the entrance. A piece of paper is stuck to the sensor so it doesn’t automatically turn on, and the washing machine is used just once a week,” she said.

Green habits: Unplugging electronic appliances, getting rid of one fluorescent light in every room, using the washing machine less frequently, using a broom instead of vacuuming and purchasing only energy-efficient appliances.

Ever since 1996, when she first started reusing shopping bags, Kim Kang-ja, a 65-year-old member of a consumer citizenship association, has stuck to the habit - primarily because paying 20 won (1.7 cents) to buy an non-reusable plastic bag felt like a waste of money.

When bringing her own bag slipped her mind, she would get a big sheet of vinyl from the vegetable corner to carry home her purchases. Once rinsed and dried at home, the vinyl could also be used to wrap dried fish and meat in the freezer. In marketplaces where vinyl is unavailable, she used one big plastic bag instead of many small bags, and used only paper bags when possible. Paper can be kept from ripping if two bags are used.

Sometimes, when bagless, Kim considers not purchasing anything if the item isn’t urgently needed.

“This had the effect of preventing shopping on impulse, so it’s like killing two birds with one stone. I have about four or five bags, all of which can be rolled and slipped in a handbag. These days, I’m getting into the habit of going to supermarkets that use text messages to advertise instead of circulating paper flyers,” she said.

“Once a month, a ‘green market’ is held for our apartment community. Old clothes and unwanted items are bought and sold here. It’s interesting to see how many young housewives frequent the market. Housewives in their 40s and 50s sometimes buy clothes that they wore as young women, even though they are no longer in fashion. It’s good fun,” explained Kim Jae-geum, 65, of Songpa District, southern Seoul.

Kim is president of the Jinju Apartment Women’s Society, and she points out that buying used household goods feels less risky when you are able to see for yourself who the seller is.

The most popular items at the society’s market are children’s toys and clothes. Both buyers and sellers are satisfied, since young children tend to quickly outgrow clothes within a year or so. Older housewives trade items such as silverware, dishes, coffee pots and even vacuums. Everyone agrees that the green market is a far better alternative to simply throwing things away unused items.

“We planned to hold the green market until fall, while the weather is still good to put up tents. But reactions around here are so great that we may have to host these markets once a month until winter,” said Kim.

Green habits: Recycling, making toilet paper with recyclable paper, not using paper cups, and exchanging goods that are no longer used at home.


One easy green habit to get into is to always keep a cloth shopping bag around so as not to waste plastic at the grocery store. By Kwen Hyek-jae