A tasty opera with cheese and mushroom in Daehangno

A tasty opera with cheese and mushroom in Daehangno 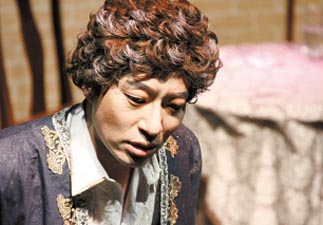 Baritone Kim Kwan-hyun has performed in an opera called “Mushroom Pizza” since earlier this month in Daehangno. He also served as art director. Provided by Kim Kwan-hyun

Seoul’s theatrical wonderland of Daehangno became home to yet another genre-busting performance earlier this month - this time with a classical twist. Bass-baritone Kim Kwan-hyun is the art director for a new opera, titled “Mushroom Pizza.”

Though the playful air is typical of a Daehangno production, the form is unfamiliar to this neighborhood dominated by plays and musicals. “I think two out of about 120 theaters in Daehangno have put an opera on stage so far,” said Kim.

But the director didn’t just set out to expand his audience’s horizons. He also wants to inspire feelings of youthful energy and nostalgia.

“I wanted to show people of all ages that this old, classic music can be recreated as a part of young culture,” Kim told the JoongAng Daily in late July.

The title of the opera does a lot of that work. The fact it includes food - and such a familiar fast food at that - strikes a much friendlier tone with the audience.

The piece is not new.

Kim saw it for the first time in Miryang, South Gyeongsang, in 2009, and he knew his search for an audience-friendly opera was at an end.

It was short, simple and fun enough to become widely appreciated, and he thought it would be perfect for his directing debut.

After choosing the right piece to put on stage, he became a middleman between the singers and management. He’s not only fought for the rights of the artists performing the piece, but he also has to worry about the big picture - that is, making a profit.

“I did enjoy directing, but I think I feel happier when I sing on stage,” Kim said. “I think I was most satisfied when I sang four times a week while I was studying in Germany.”

As Kim said, he studied in Germany, an experience he called essential to becoming a opera singer.

“Korean pansori can be fully appreciated and sung by artists only when they understand the Korean culture that created it,” he said. “Therefore, it was essential for me to study abroad in the motherland [of opera] before I started my career.”