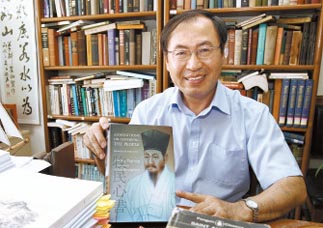 A famous masterwork by prominent Joseon Dynasty thinker Jeong Yak-yong is being translated into English for the first time. The original “Mokminsimseo” was written in Chinese characters and is a handbook for magistrates urging them to maintain their objectivity and not get too close to the people of their county or its petty officials.

Choi Byong-hyon, a professor of English literature at Honam University, worked on the translation, which will be published by the University of California Press under the title “Admonitions on Governing the People: Manual for All Administrators.”

“As the West has Plato and ‘The Republic,’ Korea has Jeong Yak-yong and ‘Mokminsimseo,’” Choi said. “Through the translation, I would dare say that new light will be shed on Jeong Yak-yong 200 years after his time.”

Choi got his master’s degree at Columbia Universiy and doctorate at the City University in New York, and has translated many Korean classics. His books include “The Artistry of Early Korean Cartography.”

Choi is hopeful that his translation of Admonitions will be widely read by academics, politicians and administrators, as well as those interested in politics, public administration and sociology.

The English translation - including the preface - is 1,170 pages long, but even that is a shortened version. The original Korean “Mokminsimseo” runs more than six volumes, but Choi thought readers would be overwhelmed by such a hefty tome, so he cut out parts he considered unimportant and condensed the meanings as much as possible.

Although the original script was abridged, Choi said this actually made the message of the book and Jeong’s ideology clearer and more comprehensible.

The original was written in Chinese characters and it took 10 years for 15 Chinese classics professors to translate it into modern Korean. But Choi translated the Korean script into English all by himself over 10 years.

“I didn’t have any Saturdays or Sundays [free] during the time I was translating ‘Mokminsimseo,’” Choi said. “Many say that the translation is the byproduct of my perseverance and obsessiveness.”

Choi added that he had to closely examine not only the Korean “Mokminsimseo” but the original Chinese script as well to convey the exact meaning. He said he often felt as though he was lifting up every rock on the ground to see what was underneath it.

Asked how he came to start such a gargantuan project, Choi said he wanted to contribute to increasing the knowledge of Korean culture among foreigners and thought that the message of Mokminsimseo - about how politicians can govern a country well - had universal applications. Since it’s not limited to Korean culture, it could attract a wider Western audience, he reasoned.

“Korean culture that is currently easily available to foreigners is quite limited - to TV dramas and modern pop culture,” Choi said. “So, translating Korean classics and other history books is a critical and urgent task, as important as international trade.”