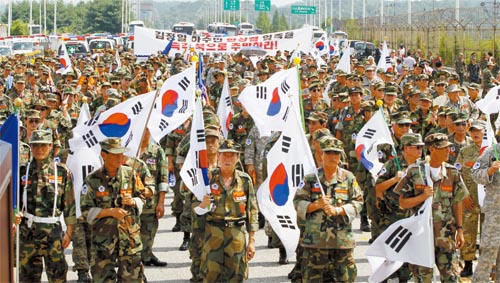 Before the return of Han Sang-ryol from an unauthorized trip to North Korea, war veterans from the South chant anti-Pyongyang slogans yesterday at a rally on the Unification Bridge near the demilitarized zone. They said Han, a pastor and anti-U.S. activist, must be sent back to the communist state. [YONHAP]

Police arrested Han Sang-ryeol yesterday when the 60-year Christian pastor and activist returned from a 70-day unauthorized trip to the North after receiving a hero’s farewell from his hosts, according to the Ministry of Unification.

Han is suspected of praising the “enemy” during the trip. The two Koreas are technically still at war.

The ministry said Han, wearing a white Korean traditional robe and holding a unification flag, walked south of the border at the truce village of Panmunjom at 3 p.m. The North advised the South in advance of Han’s time of arrival.

The ministry said Han showed up at Panmunjom at 2:57 p.m. and shook hands with the North Koreans sending him off. He then crossed the Military Demarcation Line into the Panmunjom area controlled by the United Nations Command, where two Unification Ministry officials were waiting to hand him over to intelligence officials from Seoul. 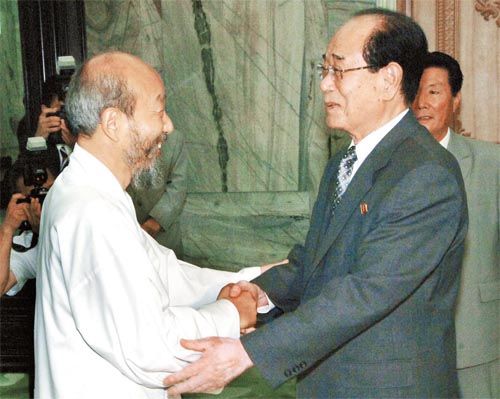 When Han crossed into the South, around 200 North Koreans from the Panmunjom area controlled by North Korea shouted “Joguk Tongil [unification of the mother country],” the ministry said.

Without Seoul’s permission, Han entered the North from China on July 12 to participate in a ceremony in Pyongyang to celebrate the 10th anniversary of the Joint Declaration, a peace pledge made during the first inter-Korean summit on June 15, 2000. The summit, considered the pinnacle in inter-Korean relations since the Korean War, was later brought into disrepute when it was disclosed that a large bribe had been paid to the North - by the South - for it to be held. During his stay, Han was known to have made speeches praising North Korean leader Kim Jong-il. Han was welcomed by high-profile North Koreans Thursday, including head of state Kim Yong-nam.

He is also suspected of holding the Lee Myung-bak administration responsible for the sinking of the Cheonan warship. Seoul and the U.S. blame the March 26 sinking, which killed 46 South Koreans, on the North. Pyongyang denies any involvement.

The police said it plans an investigation with the Justice Ministry and National Intelligence Service into why and how Han went to the North and what he did there. Intelligence officials and prosecutors said Han is likely to be charged with several criminal counts, such as praising and encouraging the enemy, which violates the National Security Law.

Violent clashes were avoided between progressive and right-wing civic groups when Han returned, according to observers.

Conservative groups including the Korea National Police Veterans Association staged a rally in front of the Unification Bridge near Panmunjom. North Korean defectors also staged an anti-Han rally in Seoul, where one speaker said: “Defectors who risked their lives to come to the Republic of Korea can’t conceal the anger and shock over Han’s act.”

Jinbo Korea and some other progressive civic groups held a rally near Panmunjom, calling for the South to try to improve the inter-Korean relationship.