Koo set to go to Land Down Under

Koo set to go to Land Down Under 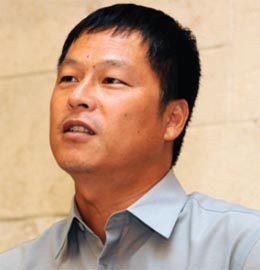 Veteran southpaw pitcher Koo Dae-sung is parting ways with the Korea Baseball Organization (KBO) and is set to embark on a new challenge in Australia.

Koo has the distinction of being the first Korean player to play in the KBO, American Major League Baseball (MLB) and the Japanese Nippon Professional Baseball (NPB). The 41-year-old is now set to join the Sydney Blue Sox of the six-team Australian Baseball League (ABL).

“The ABL will begin its inaugural season in November of this year. Each team is set to play a total of 40 games between November and February and I will play in the league,” said Koo at a retirement press conference at the Yousung Hotel in Daejeon yesterday.

“I will pitch for the Sydney Blue Sox for two seasons. I am looking forward to learning new things and I’m sure there will be opportunities to teach some of the younger guys on the team as well.”

Having started his career with the Binggre Eagles, before a sponsorship change to Hanhwa, in 1989, Koo went on to pitch for the Eagles until 2000. He would go on to pitch for the Orix BlueWave of the NPB from 2001-04 and for the New York Mets of the MLB in 2005. Koo had been a relief pitcher for the Hanhwa Eagles since returning to Korea in 2006 and made an announcement last week stating his intention to retire from the KBO.

“I’m getting up there in age. I’ve been suffering from lingering injuries since 2007 and had a surgery,” said Koo. “I’m at a point in my career where I can’t perform to my abilities. I wanted to retire while on top of my game. I’ve spent the past 30 years of my life focused on the game of baseball. It’s time for me to step away from the game in Korea.”

Since announcing his retirement from the KBO, Koo said he considered his options and thought about going to Australia to start his coaching career. “I have a child studying abroad in Australia. The timing seems perfect considering the ABL is set to commence in November,” said Koo. “I sent in an official letter of request to join the league to the Australian Baseball Federation and was accepted immediately.

“I don’t think I will be limited to a playing role with the Blue Sox. I think it’s a good opportunity considering I can continue to compete while learning the coaching aspect of the game.”

Koo has applied for a work visa, which is expected to be issued in about six week’s time. Except for the duration of the contract, Koo has yet to finalize other details with the club.

On July 1, 2009, MLB, ABF and the Australian federal government announced its intention to start a six-team professional baseball league. An eight-team league originally started in Australia in 1989, but due to financial difficulties the front office decided to shut down the league in 1999.