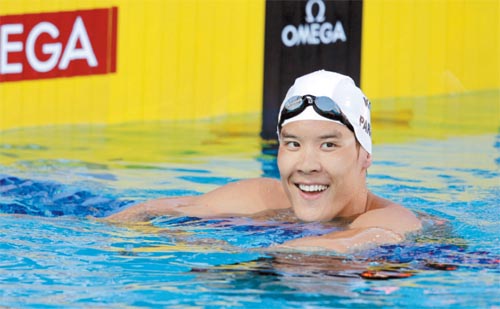 Park Tae-hwan smiles after placing first in the 400-meter freestyle event with a time of 3:44.73 at the William Woollett Aquatics Center in Irvine, California, on Saturday. [YONHAP]


Park Tae-hwan successfully washed away the bitter feelings from the disappointing performance at the 2009 FINA World Championships in Rome last summer and the slump that ensued with a confidence-boosting outing at the 2010 Pan Pacific Swimming Championships in Irvine, California.

“I am satisfied with the results and I will work hard in the remaining time leading up to the Asian Games to continue to produce good results,” stated a beaming Park to the media. “However, I wasn’t too pleased with my performance in the 1,500-meter freestyle event.”

Park finished eighth in the 1,500-meter event with the time of 15:13.91 on the same day, raising concerns and mixed reviews about his physical conditioning and endurance level. Based on his performance in Irvine, questions were raised as to whether Park should stick to the short-distance events and exclude the 1,500-meter event from his repertoire. Park shot down such suggestions.

“I will prepare to compete in all three events [200-, 400- and 1,500-meter freestyle events] at the Asian Games,” said Park. “I prepared a certain way up to this point and I think it makes sense to stick to the same regimen.”

Despite his struggles in the 1,500-meter event, Park’s latest performance should serve as a confidence booster. Park crashed out of the 2009 FINA World Championships last year by failing to qualify for the finals in all three events.

With the 2010 Guangzhou Asian Games in November fast approaching, Park had been preparing with his Australian coach Michael Ball since early this year with the aim of producing some good results at the Pan Pacific meet. The 2010 Asian Games will serve as the first major test in Park’s road to defending his Olympic gold at the 2012 London Summer Olympics, with the 2011 FINA World Championships in Shanghai, China coming up next summer.