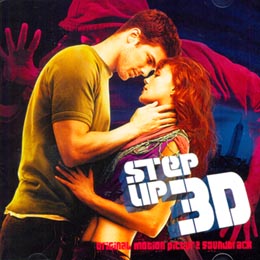 Despite the predictable story line and incredibly corny script, there is at least one good thing to be said about “Step Up 3-D”: It has a club-ready mix that makes viewers wriggle in their chairs.

The soundtrack is replete with hip-hop with hints of house, R&B and electronica and elements of funk and samba. It includes such well-known artists as Flo Rida, Trey Sonz, Estelle and Laza Morgan, along with the electro-funk band Chromeo, rising indie group N.A.S.A. and the all-American pop star Jesse McCartney.

The diversity of the soundtrack will satisfy fans of the film and dancers looking for a quick and easy mix. All the hits here are fresh, kinetic and spirited although not necessarily relevant to the cheesy plot: Chromeo suggests “fancy footwork” while Busta Rhymes promises to “tear da roof off.” Sophia Fresh’s “This Instant” featuring T-Pain contains breaks and beatdrops that represent the movie’s dancers, whom the lead characterizes as “BFAB - born from a beatbox.”