The passion of the tango in Seoul

The passion of the tango in Seoul 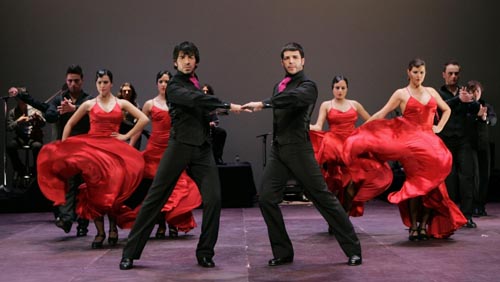 There is a famous saying: “Life is like the tango: sad, sensual, sexy, violent and quiet.”

The next two weeks will bring two opportunities to confirm that for yourself: a show by the electro-tango ensemble Bajofondo and a performance by the flamenco troupe Nuevo Ballet Espanol with star Spanish dancers Rojas and Rodriguez.

Bajofondo, named after the Spanish word for “underground,” will headline its first concert in Seoul on Saturday, two years after it debuted here at the annual Ulsan World Music Festival.

“The combination of passionate and sensual tango and electronic music will be synchronized to catchy video screen images, providing the audience with the chance to experience the ‘revolution of tango’,” said Eternity, the concert’s agency in Seoul, in a release.

Their music has gained attention for creating a hybrid tango with electronic samples and hard beats on the one hand, and live orchestras and rock and funk riffs on the other. The music is often compared to the Paris-based Gotan Project. 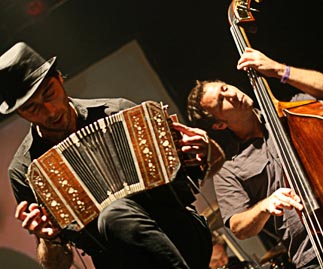 Top, the Spanish flamenco dance duo Rojas and Rodriguez will perform at the Universal Arts Center for five days beginning Sept. 8. Above, Bajofondo, an electro-tango ensemble, will headline its first Seoul concert at AX Korea on Aug. 28. Provided by the organizers

The versatile musician won best score Academy Awards two years in a row, for “Brokeback Mountain” in 2006 and “Babel” in 2007. Other critically praised works by Santaolalla include the scores for “Amores Perros” and “The Motorcycle Diaries.”

The seven-year-old band’s 90-minute show will consist mostly of tracks from its third album, the 2008 megahit “Mar Dulce.” A large portion of the album is already known to Koreans. Tracks such as “Grand Guignol,” “Pa’ Bailar” and “Infiltrado” have been featured in several Korean TV commercials in recent years.

Their show will be called “Sangre Flamenca.” Sangre is a Spanish word for “red blood,” and its organizers explain “Sangre Flamenca” is a creation that manifests “red-hot” passion and spirit by means of music and dance. Premiered in 1997, the work transcends conventional flamenco, incorporating both classic and modern Spanish dance, critics say.

After turning professional in their teenage years, the dancers Rojas and Rodriguez received the Mejor Bailarin Award together in 1994, which brought them worldwide attention. A year later they formed Nuevo Ballet Espanol, with the ambition of presenting a traditional yet creative style of flamenco, the organizers said.

Siobhan Murphy, the arts editor of London Metro, once wrote of the dynamic pair, “While Rojas shows the traditional flamenco, Rodriguez exhibits its modern version. However, the combination of these two styles successfully creates a fantastic new version.”

The music will be another notable element of the performance. Two singers, two guitars, a violin, a cello and a percussion section are expected to offer strong but often plaintive gypsy rhythms.

“Sangre Flamenca” will be staged from Sept. 8 to 12 at the Universal Arts Center in northeastern Seoul. Tickets cost between 55,000 won and 150,000 won. Visit www.superflamenco.com for information