A STRATEGY BEGINS TO FORM
Indelible memories of tragedy 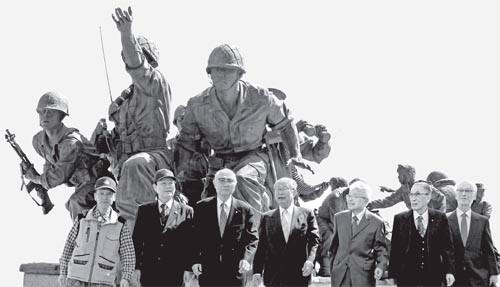 
The ROK 1st Infantry Division and portions of the U.S. Army participated in a fierce battle with North Korea’s 3rd, 13th and 15th divisions along the Dabu-dong line near Daegu starting early August 1950. The battle took close to a month and was all the fiercer considering Dabu-dong served as an important strategic area that could open the way to Daegu and Busan for the enemy troops.

In a last-ditch effort to win the war, the enemy sent its most capable troops into the area. In response, the ROK Army defended the area with 3,400 men. By successfully fending off the enemy attacks, ROK and U.S. troops were able to hold the last line of defense and also provided an opportunity for Gen. Douglas MacArthur to carry out the famous Incheon landing. The battle could easily be described as having turned the tide of the war.

The summer of 1950 was, in my memory, marred by humid weather and gruesome battles. We spent nearly the entire month of August in Dabu-dong in northern Daegu.

I was the commander of the 1st Division, and the others gathered at the War Memorial were the commanding officers of their respective units. These officers and non-commissioned officers provided insight into the Battle of Dabudong, the last decisive battle of the first stage of the Korean War.

The men who spoke about their experiences during the Korean War are now in their 80s, and although it has been 60 years since the battles, they vividly remembered the events and were sometimes overcome with emotion. It seems not even time can erase these tragic memories from their minds. 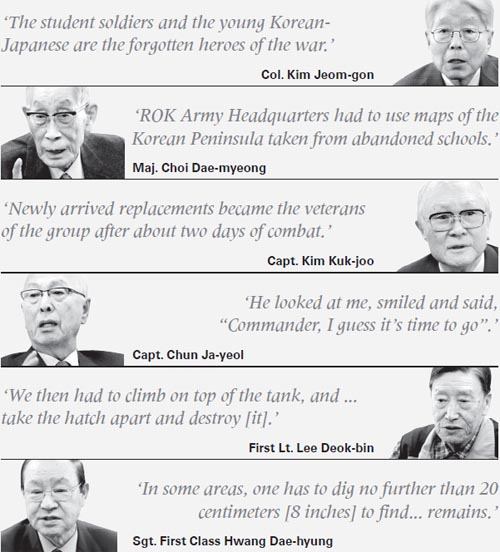 Kim Kuk-joo: Countless young men sacrificed their lives in the Battle of Dabudong. It got to the point where newly arrived replacements became the veterans of the group after about two days of combat experience.

The battles centered on close-quarters combat using rifles and hand grenades, but there were instances where hand-to-hand combat ensued. Such fights happened mostly on rainy nights when low visibility resulted in the opposing sides hitting and stabbing each other in the dark.

The Battle of Dabudong was a crucial battle in which the outcome of the entire war and the fate of the ROK was in question. This is precisely why we need to remember and pass it on to the next generations. I recall being overcome with hatred towards Kim Il Sung, who had made me and my peers go through the tragedies of war.

Hwang Dae-hyung: At the height of the battles on Hill 328 to the west of the Dabu-dong line, corpses laying peacefully in their original state were hard to come by. Torn and tattered limbs from both sides hung on tree branches and were scattered on rocks.

Most tend to think that corpses can be stacked, but that’s not true at all. Decaying corpses can never be piled on top of one another. They slip and slide down.

Geunppang [hardtack] was the staple snack for ROK servicemen, and you could always tell a newbie from battle-tested veterans by the way they ate their geunppang. Soldiers were rationed two bags of geunppang and veterans took to eating them slowly, one piece at a time, no matter how hungry they were. The inexperienced, on the other hand, would quickly munch on the snack out of hunger.

The veterans knew that eating too fast would cause thirst and so they ate slowly to avoid the need to drink as much as possible. The inexperienced soldiers who stuffed themselves with hardtack would often go off looking for water and would get shot dead by enemy fire. This happened quite often.

Chun Ja-yeol: One of the lasting images from the war was that of a Japanese national of Korean descent under my command. During one of our offensive efforts, he was shot, which caused him to drop immediately to the ground. He looked at me, smiled and said, “Commander, I guess it’s time to go.”

The young man who had come from Japan to fight and sacrifice his life for his country smiled before passing away on the battlefield. I’ll never forget that.

Lee Deok-bin: We were up against Soviet-made T-34 tanks. As a platoon leader of a heavy firearms unit, I was in charge of fending off the enemy tanks using machine guns. We had to approach the enemy tanks within 50 meters (164 feet) and deter the enemy from advancing any further. We then had to climb on top of the tanks, and if we succeeded in doing that, we had to try to take the hatch apart and destroy the enemy tank. We were able to take several prisoners of war [this way].

Choi Dae-myung: We didn’t even have proper maps back then. The ROK Army Headquarters had to use maps of the Korean Peninsula taken from abandoned schools and those on the front lines had to resort to using small maps written in diaries.

Kim Jeom-gon: The Battle of Dabudong is meaningful. We need a clear understanding of why we could not retreat any more from the Dabudong line.

Hwang Dae-hyung: At the time, a large majority of the ROK 1st Division was made up of soldiers from the Jeolla province. This was because the division started its first mission in [that area]. However, a large number of the replacements that came to us later on were from the Daegu and Gyeongsang regions. In other words, the Battle of Dabudong was a cooperative effort between the two regions. The animosity between the two regions that we hear about didn’t even exist at the time.

Efforts to excavate corpses have been ongoing for the past 16 years along the Dabudong line, and there are countless corpses being exhumed even to this day. They usually appear in pieces in different areas. In some areas, one has to dig no further than 20 centimeters [8 inches] to find a piece of the remains. Despite the large findings, it’s merely 10 percent of the total number of those classified as missing in action.

Chun Ja-yeol: The enemy troops put up a relentless effort to take Daegu. I particularly remember coming across the remains of a North Korean soldier, and it was horrifying. He had been manning a machine gun and his ankles were chained to the ground. The North Korean commanders had ordered them chained in order to prevent them from fleeing the battle. They were forced to fight to the death.

I returned to the scene about two years ago. I took my former commanders to the site, and the area where I fought was dense with large trees. It was here that an enemy division made 12 separate attacks, resulting in the deaths of half our men. I gathered some leaves and poured a bottle of soju in memory of the fallen men and had a moment of silence. It’s a painful past that I will carry with me to my grave.

Kim Jeom-gon: The student soldiers and the young Japanese nationals of Korean descent are the forgotten heroes of the war. We need to pay proper respect by searching for the photos some of these soldiers left behind. That’s the least we could do.

We served in the ROK Army for a significant period of time and we were lucky enough to survive the war. As such, we have received benefits from the government, but veterans who served for a short period of time receive close to no compensation for their efforts during the war. There are numerous veterans who are experiencing financial difficulties and visit public parks to receive free meals from volunteers. The government needs to take the time to think of ways to compensate such people.