Gunners bring Blackpool back to earth

Gunners bring Blackpool back to earth 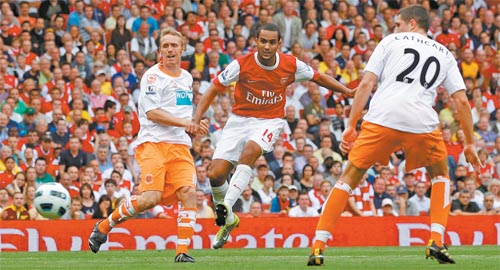 
LONDON - Theo Walcott's hat trick inspired Arsenal to a 6-0 victory over Blackpool on the day Cesc Fabregas made his return to action at the Emirates Stadium after rejecting the overtures of Barcelona.

An Andrey Arshavin penalty and goals from Abou Diaby and Marouane Chamakh completed the victory for Arsene Wenger's side and handed newly promoted Blackpool a harsh reality check following their opening day 4-0 victory at Wigan.

Ian Holloway's side had little chance of scoring a second successive win, but their hopes completely disappeared when Ian Evatt was sent off for a 31st minute foul on Chamakh that allowed Arshavin to put Arsenal two up from the penalty spot.

As frustrating as that was for the visitors, there was no disguising the difference in class between the two sides. Walcott was outstanding, clinching his hat trick in the 58th minute, shortly before Fabregas' appearance as a substitute added to the air of celebration.

Blackpool's return to the top flight after a 40-year absence could hardly have gone any better last weekend. Yet the euphoria that followed their memorable victory at the DW Stadium was quickly tempered when club chairman Karl Oyston resigned midweek.

And the yawning gap between the Premier League's elite and the newly promoted clubs was confirmed during the opening round of matches when Chelsea crushed West Bromwich Albion 6-0 and Manchester United thumped three goals past Newcastle.

Yet if Blackpool headed to north London with damage limitation in mind, they did an excellent job of disguising the fact during an enterprising opening half hour before Evatt's game-changing dismissal.

Walcott had immediately offered further signs he is ready to press on this season after the shock of being left out of England's World Cup squad by continuing the impressive form he showed in the international friendly against Hungary and again in the Gunners' visit to Liverpool last Sunday.

The winger teased Blackpool left back Stephen Crainey and twice put over tempting crosses that would have led to goals had Chamakh shown a greater appetite for getting into the six yard box.

As it was, it was left to Walcott to turn from provider to finisher with a well-taken drive from Andrey Arshavin's cross to give the home side a 12th-minute lead.

That might have knocked Blackpool's confidence, but Holloway's side showed no sign of retreating into their shell and should have drawn level when Gary Taylor-Fletcher headed wide from six yards.

The Seasiders' ambition was commendable but it also appeared likely to cost them dearly. And so it proved when Chamakh got in behind Evatt and was brought down by the center back just inside the area. The defender insisted he had played the ball but replays proved referee Mike Jones was correct and Arshavin confidently struck home the penalty after Evatt had returned to the dressing room.

From that point on the afternoon took on an air of celebration as Arsenal turned the screw, Walcott collected his hat trick, and Fabregas' appearance on the Emirates pitch drew a line under a summer of uncertainty. Walcott grabbed the third goal six minutes before halftime with a neat turn and finish just to confirm there was no chance of a blip occurring. Abou Diaby mirrored his teammate's effort five minutes after the break with a well-struck volley from Bacary Sagna's cross, then eight minutes later Walcott completed his treble after cutting in from the left and firing home left-footed.

It should have been six in the 62nd minute when Chamakh missed yet another chance, inexplicably lifting his effort over the bar from just 6 yards. But the forward's miss was quickly forgotten when Fabregas' appearance drew attention elsewhere and he finally managed to open his Arsenal account with a header six minutes from the end.