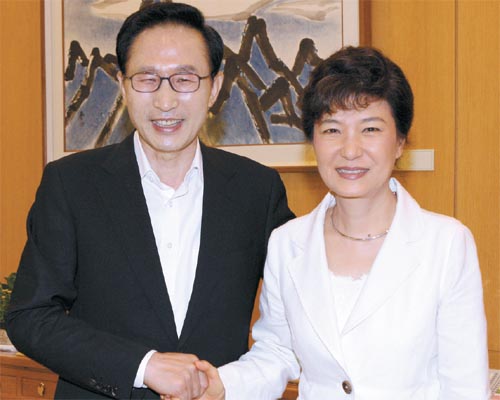 
In a rare peacemaking luncheon at the Blue House, President Lee Myung-bak and his Grand National Party archrival Park Geun-hye have agreed to cooperate in the hopes of leading the conservative ruling party to victory in the next presidential election, aides to the president and Park said yesterday.

The Blue House said yesterday that the two political heavyweights met Saturday over a luncheon at the presidential compound. “Their meeting took place on Saturday from 11:55 a.m. till 1:35 p.m.,” said Chung Jin-suk, senior secretary for political affairs. “After the meeting, they shook hands with bright faces.”

The meeting came at a sensitive time, as Lee marks the midpoint of his presidency on Wednesday. Lee’s faction had increasingly worried that conflicts with Park would further hinder the administration’s signature projects. The Park faction, meanwhile, had shown growing frustration over Lee’s latest choices for prime minister and cabinet ministers, seeing the appointments as an effort to groom his successor and derail Park’s presidential bid.

The presidential office remained tight-lipped about the meeting but, in an apparent gesture to Park, allowed Park’s spokesman to make public the details first. The spokesman said the two leaders discussed international and domestic issues as well as the 2012 presidential election.

“They discussed international affairs surrounding the Korean Peninsula as well as domestic issues including the economy,” Rep. Lee Jung-hyun, Park’s spokesman, said yesterday. “They also talked about party affairs. They discussed that the Grand National Party must win the trust of the nation for the success of the Lee administration and the GNP’s next presidential victory, and that they will cooperate ... to achieve the goals.”

Lee and Park’s relationship has been sour ever since her defeat in the 2007 presidential primary and the subsequent power struggle between pro-Lee and pro-Park factions. Park, a former GNP chairwoman who is considered one of the strongest presidential contenders for the 2012 election, has opposed major projects of the Lee administration, including the revision of the Sejong City blueprint.

Lee and Park had formally met on five occasions since late 2007 until last year, but none of the meetings resolved the strife. Their relationship, in fact, worsened after the meetings.

Unlike past meetings, there were signs in the latest encounter that Lee and Park were ready to repair the schism. It was the first time that they had formed an alliance to work together for the next presidential election.

“I was told that Lee explained to Park the backgrounds of appointing Kim Tae-ho as the next prime minister and pledged a fair management on the competition for his successor,” said a senior presidential aide. “Park, in return, reportedly agreed that she will cooperate with Lee’s flagship projects including the four major rivers restoration programs.”