Junior Kim’s climb to power on the way

Junior Kim’s climb to power on the way 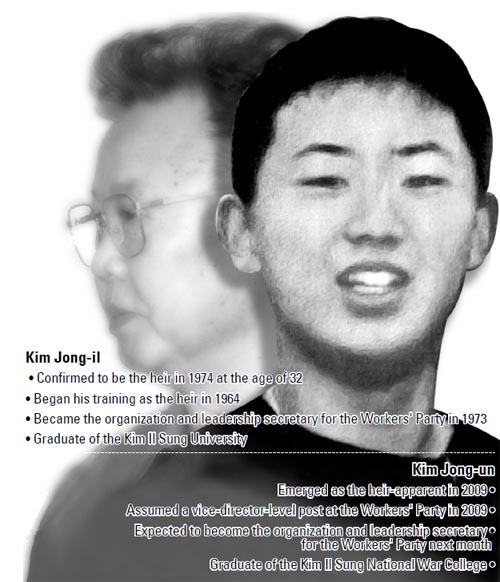 Kim Jong-un, the son and presumed heir-apparent of North Korean leader Kim Jong-il, will be appointed to one of the country’s most influential posts at an official meeting next month, according to a North Korean defectors’ group in Seoul.

This could give the world the first glimpse of the shadowy figure of Kim Jong-un, for which little public information has been revealed.

With Kim Jong-il apparently in ill health, the North’s ruling Workers’ Party will hold a rare meeting of its representative members next month.

North Korea Intellectuals Society, whose website posts news and analysis on North Korea, cited sources in saying the junior Kim will assume the post of secretary for the organization and leadership of the Workers’ Party at the representatives’ meeting, the first of its kind in 44 years, on Sept. 6-8.

The meeting will pave the way for the Kim Jong-un era and a generational change in the North Korean leadership, according to sources quoted by North Korea Intellectuals Society.

Observers say the post to be filled by the junior Kim is responsible for personnel management and the organization of the party and is as powerful as the party’s general secretary, held by Kim Jong-il.

Kim Jong-il was appointed as a party secretary responsible organizational matters in September 1973, five months before he was officially named as the heir to his father and North Korea founder Kim Il-sung.

Kim Jong-il, 68, is believed to be suffering from severe illnesses, including a possible stroke. This has raised expectations that the succession of Kim Jong-un, his third son, is imminent. Little about Jong-un is known, with his birth year believed to be either 1983 or 1984.

North Korea Intellectuals Society said some of Kim Jong-il’s confidants including Jang Song-thaek, Kim Jong-un’s uncle, who will also be promoted at the next month’s meeting.

The sources said Jang, Kim Yong-chun and O Kuk-ryol, all vice ministers on the National Defense Commission, will be appointed as the members of the Politburo standing committee. Currently, Kim Jong-il is the only Politburo member.

The North Korean Central Broadcasting Station also reported that North Korea’s former Prime Minister Pak Pong-ju, who is a close Jang aide, appears to be back in power, three years after he was ousted because of his failed economic reform drive.

He was described as the first deputy director of the Central Committee of the Worker’s Party at a ceremony held Friday.

Pak began to serve as prime minister between September 2003 and April 2007. “His reinstatement could be connected with an economic policy shift back to pragmatism,” said an analyst.