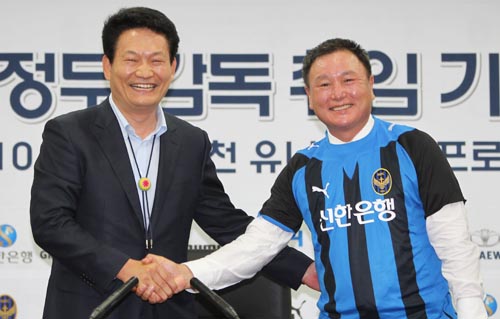 
Fresh off his successful stint with the national team, new Incheon United manager Huh Jung-moo has already set a lofty goal for his squad: win the K-League title by 2013.

“I am looking forward to reaching new feats in a city that will eventually become a world-class football mecca,” Huh said at a press conference held at Incheon City Hall yesterday morning. “It will be difficult right off the bat, but I want to get an excellent system in place so that I can make a run for a K-League title within three year’s time.”

Incheon United announced on Sunday that it reached a deal with the 55-year-old former national football team manager, revealing yesterday that the contract spans four years. Although the team did not disclose the financial terms of the deal, observers say it is likely among the highest in the league for a manager.

Huh is coming off a two-and-a-half-year term with the national team, having led the squad to the Round of 16 at the 2010 South Africa World Cup this summer. He turned down an offer to extend his contract with the team at the conclusion of the World Cup, saying he wanted to take some time off. But Huh said he was enticed to return to the football world by the challenge of taking on a team with “potential.”

“Having talked to Song Young-gil, the mayor of Incheon, I was inspired by his ideas and the sports infrastructure being planned by city officials,” Huh said. “I’m looking forward to taking on a new and fun challenge. I took future possibilities into consideration, and the potential for Incheon to develop further was a big draw for me.”

Speculation swirled in the past that Incheon United was recruiting Huh for its president post. The coach denied the rumors yesterday, saying he had been approached by the team to replace interim manager Kim Bong-kil and that he isn’t interested in the president position.

“I intend to focus on managing the football club,” Huh said. “Of course, I will provide some advice on certain aspects of team operations based on my past experiences if need be, but I will commit myself to my duties as the manager.”

His goal of helping Incheon United secure a title in the next few years is a lofty one, as it is struggling mightily this season. Huh’s immediate priority is to help Incheon United - which is 10th in league standings with six wins, one draw and 10 losses - snap its five-game losing streak. Despite his desire to rebuild the team over the next few years, Huh said he will take his time before making any big changes.

Huh will oversee Incheon United’s training starting on Thursday and will make his managerial debut against Busan I’Park on Sept. 4.