Stolen base king falters on his way to 4th title

Stolen base king falters on his way to 4th title 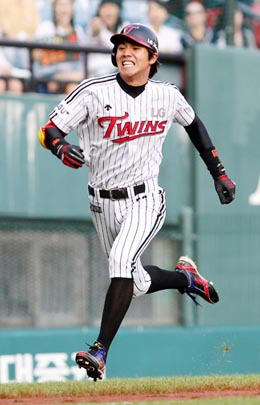 Lee Dae-hyung of the LG Twins is widely considered the best base runner in the Korea Baseball Organization (KBO), but a challenger has emerged this season in Kim Joo-chan of the Lotte Giants.

Lee has led the league in steals the past three seasons with at least 50 steals per season. Having stole 47 bases so far this season, Lee was on pace to win his fourth consecutive title with 50 or more stolen bases. The only player in the history of the KBO to top the league in stolen bases in four consecutive seasons is former Lotte Giants outfielder Jung Soo-keun.

However, with Lee struggling at the plate recently, Kim is closing in on the league leader in steals with 44 steals so far this season.

At the moment, Kim is on pace to overtake Lee in the race. Kim added a steal in his team’s 8-3 win over the Doosan Bears to tie his personal single season record.

“It’s important for us to reach the postseason. It’s not a good time to seek personal goals,” said Kim. “In order to lead the league in steals, you need to steal at least 50 bases in a season.”

In the month of August, Lee posted a batting average of .093 and an on-base percentage of .170 in 16 games. Having had trouble reaching base, Lee has put up three steals during the stretch.

“I will continue to try my best until the end of the season,” stated Lee.

Despite Lee’s problems, LG’s base running coach Yoo Ji-hyun has faith that he will deliver down the final stretch.

“Kim has not even overtaken Lee for the lead in total stolen bases,” said Yoo. “Lee is by far the best base runner in the league. Even if Lee was trailing Kim, he could overtake him in the remaining games.”

Last year, Lee put up 19 steals in the final 20 games of the season. He even stole five bases in a single game against the Kia Tigers on September 19 in Gwangju.

“Lee produced when the entire team was struggling at the start of the season,” said Yoo. “It must have been a physically demanding season for him, but once the weather cools down, he’ll regain some of his strength. There’s no need to question his quest for his fourth consecutive title.”

Lotte’s base running coach Park Gae-won thinks Kim has been hesitant because the Giants are hard at work trying to maintain their fourth and final playoff spot.

“Kim has the best burst of speed in the KBO,” said Park. “If he improves his on-base percentage, he has a solid shot at leading the league in steals.

“Our offense has been playing well this season, and Kim has stolen bases when we’re nursing a big lead. With our team in a battle for the final playoff spot, I think Kim has been cautious.”